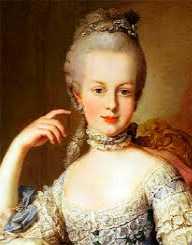 In 1774, Marie Antoinette was appointed as the Queen of France and Navarre. She stayed in this position until her demise in 1793. She is famously known for giving rise to the French Revolution.

Marie Antoinette was the daughter of Holy Roman Emperor Francis 1 and her mother, Empress Maria Theresa. It was after her marriage to the Dauphine of France that Marie was ordained this honor. Her beauty and attractive nature were honored by all. Her beauty started to fade when public suspicion turned into a reality. She saw people of France as a bother.

Marie Antoinette was born on November 2, 1755, in Vienna, Austria. She was the youngest child of Empress Maria Theresa, and Emperor Francis I. Young Antoinette grew up as a charming little girl with loads of affluence surrounding her docket. Her parents hired private teachers, and she didn’t know any local house other than living in a palace. Marie loved to play with her sister called Maria Carolina.

At the age of eleven, little Maria wasn’t in the waiting list for singlehood. She was promised marriage by her parents to marry the Prince of France. Well, this wasn’t a Titanic kind of love but an alliance kind of treaty between France and Austria.

At 15 years of age, Marie Antoinette was married to the Prince of France, although not physically since she didn’t see him face to face. It was after a month that both the soon to be the king and the queen met in an arranged marriage ceremony.

After the death of King of France, Louis XV, Marie Antoinette's husband was crowned as King Louis XVI. As a result, Marie became the Queen of France. It wasn’t a doubt that Marie waited for this day and with all limbs and bounds it happened.

From afar, Marie knew how to use the palace resources from ordering new decoration, jewelry, dramatic dresses to fancy hairdos. She didn’t bother whether France economy would be affected or not. After some time, the public started to question her in regards to her living standards. The rivals of King Louis XVI spread a rumor about her elegant living, spending as well as secret affairs.

In 1778 Marie Antoinette and the King of France had their first child called Maria. She had four children. She was a dedicated mother to her four children. Not so much time was involved in her house since she came to embrace politics.

Marie did one thing that upset France at large. Yes, she was married to Prince of France, but she fully supported her inborn motherland, Austria. Even after trying to spend a little less to hide her motives, the public never kept mum with everything that surrounded this woman.

The King himself offered to purchase for his queen the diamond necklace. She turned down the offer claiming it to be expensive jewelry. It wasn’t that long that goon planned to steal the same necklace claiming they were sent by the one and only, Queen of France. Well, Marie didn’t know what was waiting, but her reputation grew from better to worse.

On July 14, 1789, The French Revolution started at Bastille. From afar, it looked like the King himself would control the whole affair. After months, uncountable of men and women marched from Paris to the Palace.

They created havoc until some managed to enter in search of the Queen. Fortunately, she had already escaped. She wasn’t that far that the crowd opted to kill her instantly, but she was later saved by the current peacemaker, Marquis.

Marie Antoinette was blamed for France's economy as well as the French Revolution hence being given a moniker “Madam Deficit.” In 1791 the King and the Queen of France were imprisoned in Paris.

Their attempt to escape bore nothing in return. It was on January 21, 1793, that King Louis XVI was beheaded. Marie guiltiness sent her to execution on October 16, 1793. Marie Antoinette and King Louis XVI lived as one but had different lives. He loved to make furniture and read while her queen fell in love with giant hairdos plus wild parties.