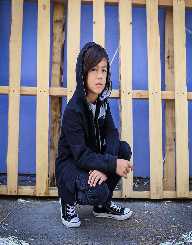 Malachi Barton was born on March 10, 2007, in Colorado. He comes from a very musical family. Barton’s mother Felicia is a singer and have released several songs. She was a contestant in the Season 8 of American Idol. His father is also a musician and plays guitar. His parents have worked together on several singles. Barton has a younger brother.

Barton began his media career with appearing in commercials for Lay’s Potato Chips, McDonald's, and Kmart. In 2011, only at age four, he was cast in an episode of the television series Workaholics. He appeared in the season 4 episode We Be Clownin’. The following year, he landed a role in television sitcom See Dad Run. After this project, he starred in Instant Mom in one episode of season three of the show.

Malachi gained widespread recognition in 2016 when he was cast in the Disney show Stuck in the Middle. In the show, he plays Beast Diaz. The show is currently in its second season, and the young actor shows a lot of promise.
Besides his television work, Barton is also a keen baseball player and enjoys music. He has not received a musical education but has self-thought to play several short tunes on various instruments. Barton also has an Instagram account, which is managed by his mother. He has around 160 thousand followers on his account, and the number keeps increasing.