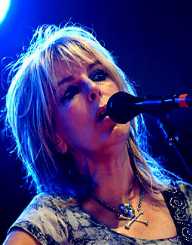 American singer-songwriter Lucinda Williams was born in Lake Charles, Louisiana on the 26 January 1953 to Lucille Fern Day and Miller Williams. Her father who was an academic, a professor of literature, was also a poet. She was one of three children born to the couple. Apart from Lucinda, they had a son Robert and a daughter Karyn Elizabeth. Williams’ parents divorced when she was a child, and her father raised her.

Lucinda Williams was a student at the University of Arkansas.

Interested in music and writing from a young age, she began playing the guitar as a girl. By the time she was 17, she had performed live with banjo player Clark Jones as part of a duo.  In the mid-1970s Williams relocated to Texas and during the second half of the 1970s, played in clubs in and around Houston and Austin.

Lucinda Williams first album was Ramblin’ On My Mind (1979), and she followed that up with Happy Woman Blues (1980). By the time her second album was released, her confidence as a songwriter had developed, and the album contained all original compositions. Neither album received much attention from the media. She moved to Los Angeles in the mid-1980s, and after her third album, Lucinda Williams, came out in 1988, people began to notice her. Mary Chapin Carpenter recorded Passionate Kisses, one of Williams’ compositions from the self-titled album. The album went on to win Williams a Grammy Award for Best Contemporary Folk album, and it was also certified gold.

TIME magazine voted Williams America’s Best Songwriter (2002). She has won 3 Grammy Awards (15 nominations), 2 Americana Awards (12 nominations) and in 1998 was listed on a list of the 100 Greatest Women in Rock & Roll. The three Grammy Awards she won are: (1994) Best Country Song for Passionate Kisses;(1999)

Best Contemporary Folk Album for Car Wheels on a Gravel Road and (2002) Best Female Rock Vocal Performance for getting Right With God. She won a Libera Award in 2015: Heritage Album of the Year for Down Where The Spirit Meets the Bone. Her Americana Awards include 2016 Album of the Year and Artist of the Year for The Ghosts of Highway 20.

Lucinda Williams married her manager, Tom Overby, in 2009. She was previously married to Greg Sowders.

Lucinda Williams was born with a mild form of Spina Bifida which caused weakness in her back. It is a congenital disease which she inherited from her father who also suffered from the condition.