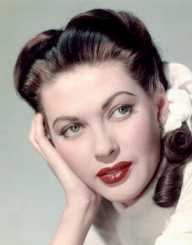 She won the Golden Globe Award for Most Promising Award for her role in That Hagan Girl in 1947. Maxwell retired from acting after her role as Moneypenny ended. Retiring from acting, she returned to Canada, where she wrote a column for the Toronto Sun.

Lois Maxwell was born on February 14, 1927, in Kitchener, Ontario. Her father was a teacher and her mother a nurse. She grew up in Toronto where she attended Lawrence Park Collegiate Institute.

Lois Maxwell started a career as a babysitter but later left to work as a waitress at Bigwin Inn in Lake of Bays, Ontario. At the age of 15, Lois left home to join the Canadian Women’s Army Corps during the World War II. This was a unit formed to bring men for combat duties but were engaged in only non-combat responsibilities including mechanics, drivers, and secretaries.

Lois Maxwell became a member of the Army Show in Canada and the Canadian Auxiliary Services Entertainment Unit. She was later posted to the United Kingdom where she entertained the troops with music and dance skills. While in London, she enrolled at the Royal Academy of Dramatic Art and was a friend of fellow student Roger Moore.

Lois Maxwell started her acting career in the late 1940s. She moved to Hollywood at the age of 20, to pursue her acting career. In 1947, she featured in the Shirley Temple’s comedy That Hagan Girl, which won her the Golden Globe Awards for Most Promising Newcomer. Lois posed with actress Marilyn Moore for a Life magazine photo layout in 1949. It was during this period that she picked the name Maxwell and dropped the surname Hooker.

After Lois Maxwell changed the surname, her other family members followed suit. She played several minor roles in B films while in Hollywood. Being dissatisfied with how she was used, she moved from Hollywood to Europe. She initially settled in Rome in 1950 where she featured in films including the adaptation of the opera Aida in 1953.

Lois Maxwell later moved to London where she appeared in the television series Danger Man. She played roles in many other series including Adventures in Rainbow Country, and guest starred in The Saint and The Persuaders! She also played minor roles in films like Lolita, 1962, and in the series The Avengers and The Baron.

Lois Maxwell had a role in the James Bond film Dr. No, 1962 and Miss Moneypenny. This was the start of her roles in several other James Bond projects as Moneypenny.

She followed it with the made-for-TV special, Welcome to Japan, Mr. Bond co-starring Abbe Lane. In 1971, she starred in Diamonds Are Forever, Live and Let Die, 1973, and in the French comedy Bonsbaisers de Hong Kong, 1975, during which she reprised her role of Moneypenny. Maxwell's final role as Moneypenny was in A View to a Kill in 1985.

Lois Maxwell became a business woman working in the textile industry. She eventually returned to her homeland settling in Fort Erie, Ontario, where she spent her summers at a cottage outside of Espanola.

While in Canada, Maxwell wrote for Toronto Sun newspaper under the pen name Miss Moneypenny. After she thought she had had enough in acting and writing, she returned to her daughter in the UK retiring to a cottage in Frome, Somerset.

Lois Maxwell married TV executive Peter Marriott in 1957. The two met while Maxwell was on a trip to France. They had two children, daughter Melinda and son Christian.

Her husband died in 1973 after previously suffering from a heart attack and never recovered. Maxwell suffered from bowel cancer and had surgery in 2001. Maxwell died on September 29, 2007, at Fremantle Hospital.