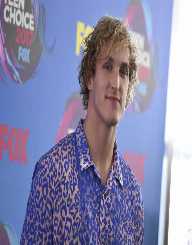 At only 22 years of age, Logan Paul has triumphed to fame with his indelible 6-second videos and funny photos. In fact, after six months he and his younger brother, Jake Paul started to pocket extra change than their parents. Paul perfectly knows how to boom the internet, but we haven’t yet known if he is about to blow the whole world. With his top-notch editing and exceptional skills, Paul will soon rule the world of entertainment. The good news is that he believes in himself to the point of dropping out of University to find crossover fame. He is now known as a promising actor and internet personality who has over 13 million followers on Facebook and over 2 million subscribers in his Vine account. Read further to find out more about Paul’s life.

Logan Paul is an independent and freedom lover. He can at times behave politely and diplomatically, but he is also a sensitive and emotional being. He appreciates getting unleveled in a project that will give him an opportunity to pursue more plans. Most of all, he is quite resourceful hence welcoming an enthusiastic and industrious trait. Like any ambitious Videographer, Paul is always around the clock, and he is not setting his limits soon. If there is a person who is convinced that entertainment business is his path to success, then it’s Paul. At this point, it doesn't matter if he is right or wrong, people always believe in him. Probably it’s because of his optimistic nature.

On 1 April 1995, Logan Alexander Paul was born in Westlake; Ohio in the U.S. He was born to Realtor, Greg, and a registered nurse Pam Stepnick. Both of his parents are 53 years old. Logan joined Ohio University where he majored in the engineering department in Cleveland. While still at school he teamed up with State Champion Wrestler group where he learned wrestling techniques. During his teenage life, Logan loved to play football, and he always acted as the leader of his team. At twelve years old, Logan and his younger brother Jack wanted to go to an NFL football match. It was here that Greg bought for them a video camera to record and view the live game later. Greg never thought that the gift would come to name both of them as Vine Stars.

At 19 years old, Paul signed up for a Vine account. In the process, his brother also joined, and it was here that they got into a disagreement on who will upload the most likable video. In one weeks’ time, both of their six-second videos had over 100,000 likes and followers. And this is what made them dominate the social world. As a result, Paul dropped out of University to pursue his dream.

Early in 2014, Logan Paul starred as Carl in a famous film called Carl. He followed it up with a drama called The Space between the US in 2017.Afterward, he reprised back as an active social media personality. In the mid of 2013, he started small with 900 followers. The following years, he began to post best videos where he received over 1 million followers. He gained over 13 million likes on his Facebook page and 2 million followers on a six-second video application app called Vine. He now has over 1.5 million YouTube subscribers and other 8 million on Instagram. Apart from being an avid internet lover, Logan is also a television personality. He took a web series called Foursome in 2016.

Unlike other prominent personnel’s’ Logan seems to have a private life aside from his active life. There is little to no information about his whereabouts, dating, etc. Pepsi selected Logan to appear in a Vine-based campaign which was a success to the end. For his incredible performance, he is always on the move with other Vine Stars including Christian DelGrosso and Mathew Espinosa. Throughout his career, he has shot films with celebrities like Peyton List, Alycia Debnam, and Dwayne Johnson among others.