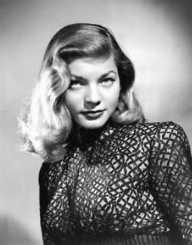 Lauren Bacall has been noted as one of the best American actresses of the 20th century.  Her looks and deep voice made her easily recognized by her fans.

Her parents divorced when she was five years old.  Initially, she wanted to dance, but her interests shifted to acting.  Her stage name came from her mother's maiden name, Bacal.

After high school, Lauren Bacall went to the American Academy of Dramatic Arts in New York.

Through the American Academy of Dramatic Arts, Lauren Bacall was able to work in smaller, off-Broadway productions.

She also started modeling.  It was her cover photo in Harper's Bazaar that got her noticed.  It led to her first film at 19 years old and her husband.

After her modeling career and first film, Lauren Bacall continued to star in films about once a year.  Lauren Bacall became an iconic star with unique green eyes and her signature “look.”  After the death of her husband Humphrey Bogart, she continued working on films, movies, and Broadway.

Lauren Bacall took some time off in the 1970s, then made appearances. = Lauren Bacall won awards for her Broadway musicals, and acclaim for her supporting role in The Mirror Has Two Faces with Barbara Streisand.

Lauren Bacall made appearances in movies in theaters and on television.  Lauren Bacall appeared in My Fellow Americans and lent her vocal talents to Howl's Moving Castle and Family Guy.  Lauren Bacall died on August 12, 2014.  She was 89 years old.

Lauren Bacall married fellow actor Humphrey Bogart in 1945.  He was 25 years older than her.  When Lauren Bacall and Bogart first met on the set of her first movie, To Have and Have Not, in 1944, he was still married.  Bogart eventually divorced his wife.

From there they starred in The Big Sleep, Key Largo, and Dark Passage.  Together they had two children.  Bogart died in 1957 from throat cancer.  They had been seen as the greatest romances in Hollywood.  Lauren Bacall remarried in 1961 to Jason Robards.  They had one child and divorced in 1969.

Lauren Bacall was involved in charities such as Best Buddies and Aid for AIDS.