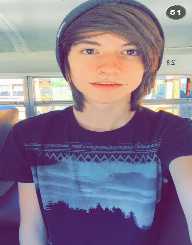 Kyle David Hall is a YouTube star and social media personality, from the United States. Kyle David Hall is a naturally funny, charismatic and fun loving individual, and portrays these attributes in his videos online. Kyle video content is often inspiring and encouraging and describes issues relating to general life experiences and technology.

Kyle David Hall journey began in 2010 when he launched his eponymous YouTube channel, previously referred to as BlueAirSoft. David later gained even more fame on other social media platforms, i.e., Instagram and YouNow, where this young, charismatic personality is never short of fans. Since the start of his journey, Kyle has now become one of the most adored Youtubers, with over 230 thousand subscribers for his channel. Also, Kyle has a collaboration channel with the likes of Bryan stars and Johnnie Guilbert, called My Digital escape.

Kyle David Hall was born on 21st June 1998 in Ohio, USA. Kyle has been brought up in Ohio living with his parents and a brother.

From an early age, Kyle David Hall was always an ambitious kid, who felt the sky is the limit for him. From these days, Kyle loved filming and recording small events and scenarios, for example, family events. Hence when Kyle discovered YouTube, he never looked back.

However, it was a bumpy ride in the beginning since Kyle David Hall faced challenges like bullying and dishonest partners. However, Kyle used this as motivation and the basis for his start, whereby he posted videos that promoted positive energy.

As Kyle David Hall developed more interest in YouTube, he met famous you tubers like Deefizzy and Shane Dawson, who became his mentors Kyle then started his own YouTube channel, where he could come up with personal clips and films. Through the movie, Kyle could share his personal life experiences in his own hilarious and motivational way.

Examples of these films are; `Snow day,’ `Alone when am not’ and `found missing.’ Also, Kyle David Hall has an extensive fan base on YouNow, whereby he live streams on a regular basis.

Most of Kylé's video content is motivational and always puts a smile on the audience’s face. Cleary, Kyle's journey has not always been a smooth one. In one of his videos `Draw my life’, Kyle shares his challenges about heartbreaks and suicide attempts. Kyle David Hall is ever an inspiration to the fans because no matter how low he may go, he never gave in. As a result, this is the first bit of Kyle's videos; he gains more fame since many fans relate to his struggles.

Apart from social media, Kyle David Hall loves technology. David has many videos on his channels that illustrate the latest technological devices and games. As a result of such updates and reviews, Kyle has also gained considerable support from the gaming society. Also, he loves pets and is known to own a pet dog.

In general, Kyle David Hall's ambition is to become an inspirational figure to the youth in his generation. Kyle is always relentless in posting motivational content for his fans. Judging by the level of his fame at the moment, the sky is the limit for him.