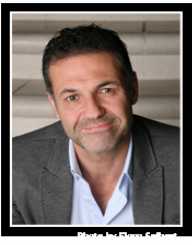 Khaled Hosseini is an Afghan-born novelist.  Some of his award-winning books include The Kite Runner and AThousand Splendid Suns

Khaled Hosseini was born on March 4, 1965, in Kabul, Afghanistan.  His father Nasser was a diplomat in Afghanistan's Ministry of Foreign Affairs.  His mother taught Farsi at a girl's high school.

The family enjoyed a middle-class lifestyle in Afghanistan. Khaled Hosseini enjoyed writing and often wrote short stories.  The Hosseini family lived in his birth country until 1976 when Nasser had a job in Paris.

When he was 15, Khaled Hosseini moved to the United States.  The Soviet Union invaded Afghanistan, so the family sought political asylum in California.

After college, Khaled Hossein worked as a physician for ten years.  During that time, he wrote his first novel, The Kite Runner.  It is a story of a young boy and his best friend in Kabul with themes about the complexities of relationships.

The semi-autobiographical novel was published in 2003.  Since then it has been translated into 40 languages and sold over 12 million copies around the world.  It was also adapted into a graphic novel in 2011.

After the initial success of his first novel, Khaled Hossein only practiced medicine for another year and a half before he changed his career to writing.  In 2007, he published his second novel, A Thousand Splendid Suns. This novel had women as the main characters and gave a hard look at the discrimination of women in Afghan culture.  The novel sold more than 38 copies worldwide.

In 2013, Khaled Hosseini published And the Mountains Echoed.  This novel which has a multi-generational story has sold more than three million copies.

Khaled Hossein married Roya while working on his residency.  The couple has two children.

Khaled Hosseini's books were published after 9/11 and after the war in Afghanistan.  However, it did not focus so much on the trendy view of the country.  It looked more into social and cultural issues, but most of all it looked at the family.

Khaled Hossein was named a Goodwill Envoy to the United Nations Refugee Agency.  During that time he traveled to Afghanistan.  He established The Khaled Hosseini Foundation for the humanitarian assistance to the Afghani people, particularly children, and refugees.