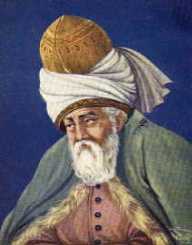 Maulana Jalaluddin Rumi was born in 1207. He was mononymously known as Rumi. In the 13th century, he was one of the greatest spiritual and poetic intellects especially among those familiar with Persian. He came up with his poems mainly through every day spiritual circumstances. His family members were erudite theologians which resulted to Rumi creatively describing the word in a spiritual view. His poems are most popular in Iran, Afghanistan, and Tajikistan, who are mainly Persian speakers.

Maulana Jalaluddin Rumi was born on September 30th, 1207 in Afghanistan, formerly known as Balk. His father was Bahaduddin Walad a theologian and his mother, Mumina Khatun. Both parents were local Persian-speaking and lived in a village located along River Vakhsh. Rumi along with his family and a group of disciples had to leave Balk when Mongols invaded central Asia between 1215 and 1220. They settled in Konya, presently located in western Turkey. This was after trying a series of Muslim populated lands.

Through the practice of Sufism and proper guidance from Sayyed Termazi, Rumi gained much knowledge on spiritual matters. He was also among the disciples of Sayyed Burhan taught by his father. He later took over the role of his father when he passed on and became one of the famous religious teachers. Rumi rose to become a great preacher, and by the age of 24, he was no doubt a spiritual legend.

On 5th November 1244, Rumi's transformation to poetic journey began. This was upon his meeting with Shams-e Tabrizi, a wanderer where a great friendship developed among them. Shams-e Tabrizi was later allegedly murdered by Rumi’s students. This was as a result of jealousy of the strong friendship the two had developed. It was then that Rumi expressed his loss and the love he had for his friend through poems, dance, and songs.

Ten years later Rumi kept writing poems describing different situations in a spiritual set up. Among his famous work were Diwan-e-Kabir or Diwan-e Shams-e Tabrizi and Mathnawi. Rumi then spent most of his later years in Anatolia.

Not much is known about Rumi’s own life. He is believed to have had a son Sultan Walad. Upon his passing, His son along with his followers founded Mevlevi Order or Order of Whirling Dervishes.

Rumi took his last breath on 17th December 1273, in Konya and was buried next to his father. Being a great poet, a Tomb was built in his honor and named Mevlana mausoleum. The tomb consisted of a dance hall, mosque and lavish living quarters. People and admirers of his work come from all parts of the world visit the tomb. It acted as a pilgrimage.