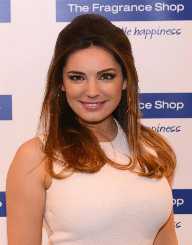 Kelly Brook was born and raised as Kelly Ann Parsons on 23 November 1979 in Rochester, Kent. Her mother was a cook, father a scaffolder, and she had two siblings – a younger brother and an older sister. Her father passed away at the age of 57, battling lung cancer.

Kelly Brook attended school in Rochester before moving to London. In London, she studied at the Italia Conti Academy of Theatre Arts for three years. After three years of studies, she became a professional model.

Kelly Brook started her modeling career at the age of 16. It began shortly after winning a beauty competition, which she was signed up for by her mother. Afterward, she worked for several advertising campaigns, one of them was for Bravissimo. Bravissimo specializes in bras and lingerie for women with large breasts. During the Bravissimo campaign, she was recognized by editorial team of Daily Star tabloid, who then began featuring her as Page Three girl. After that Brook began appearing in several magazines like GQ and FHM. That is when she was voted as having the best British female body in a poll over 5,000 women for Grazia magazine. In 2005 she was on top of the“FHM 100 Sexiest Women in the World” list. She has been appearing in this list every year since 1998. FHM featured her as the cover star of the World Cup 2010 special issue, and also as a cover model in April 2011.

Kelly Brook signed a contract with “Axe” spray in 2007, and since then has appeared numerous times on billboards, in newspapers and online. Other advertising campaigns include Sky+, T Mobile, Reebok, and Ultimo. One of the very noteworthy points of Brook’s modeling career is appearing in the American edition of Playboy magazine in September 2010. Later that same year in October she appeared live as part of promotion for Carlsberg and Sky3D at Clapham Picture House.

Brook produces her own line of swimwear in cooperation with New Look. She has also modeled for this swimwear line herself, and in 2014 she launched a clothing line for Simply Be. A year later she became a brand ambassador for Sketchers.

Brook also supported the “Whose Skin Are You In?” campaign by PETA. She participated by posing nude with her body painted in scales.

Brook’s television career began at the age of 18 when she started presenting youth television shows on MTV, Granada Television, and Trouble TV. In 1999 she was replacing a female half of the hosting team of “ The Big Breakfast” together with Johhny Vaughan – this was considered her breakthrough. Later in 2005 she hosted a reality television programme “Celebrity Love Island”.

Brook’s first participation in reality television was in 2007.  It was a dancing competition show “Strictly Come Dancing” with dance partner Brendan Cole, and it aired on BBC1. During participation in this show her father passed away, and even though she initially continued in the show, she withdrew herself from the competition a couple of weeks later.

A year later, in 2008 she returned to the show’s special Christmas edition, dancing with Brian Fortuna. They made it as the fourth, but studio audience’s votes helped them climb up to the second place. Later that same year she participated as one of three judges for the reality television programme “Dirty Dancing: The Time of Your Life”.

In 2009 she was introduced as the fourth judge for “Britain’s Got Talent”. Unfortunately, it lasted not more than for a week because the producers decided that this format instead of the usual three-judge format was too complicated. Brook did appear as a guest judge in an episode that aired in May 2009.

In 2013 Brook appeared as team captain replacing Fearne Cotton on her maternity leave in “Celebrity Juice”, and in 2016 she became a team captain on the show “It’s Not Me, It’s You”.

Brook appeared in several minor roles in movies since 1997, also in several television series seasons, but her first big role was in year 2005 in the film “School for Seduction”. Brooks received very positive reviews for this movie. She is well known for her leading role in “Piranha 3D”, a highly successful horror comedy remake in 2010. Since then she has participated in several other movies and television series.

Kelly Brook played in several plays. Some of her plays have received mixed reviews, stating her body being highly appreciated, but her performance not good enough for the roles she was playing. In a play “Eye Contact” she played an exotic dancer, and in “Fat Pig” in London she had a role as Jeannie. Brook also appeared in “Calendar Girls” as Celia and in a cabaret show “Forever Crazy” at the end of 2012.

In year 2014 Kelly Brook released her autobiography, which reached the Sunday Times Bestseller list later the same month. Her work was criticized by several organizations and domestic violence groups for an easy-going attitude towards punching two of her ex-partners.

Brook’s personal life has also had its ups and downs. Until mid-2000’s she was in a relationship with actor Jason Statham. While filming the thriller “Survival Island” in 2005 she met Billy Zane, later they got engaged, but after the death of her father the wedding was postponed. Brook and Zane split up in 2008, briefly got back together, until ended their relationship altogether in August 2008.

In 2010 Brook started dating rugby Player Tom Evans and announced a pregnancy via her private Twitter account. Sadly sometime later she had a miscarriage. In February 2013 it was announced that Brooks and Evans split up.

Her latest relationship was with a fitness model David McIntosh in 2014. The couple announced their engagement shortly after getting together, but later in 2014 Brook announced via Twitter that the engagement was off.