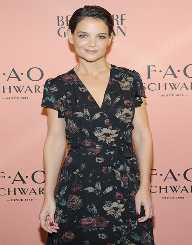 Kate Noelle Holmes was born on December 18, 1978, in Toledo, Ohio. She is the youngest of five children in her family. Her mother Kathleen was a homemaker, and her father Martin- an attorney. Holmes attended the Notre Dame Academy in Toledo. During her time in school, Holmes participated in school musicals. She was an excellent student and got a high score on her SAT, which allowed her to enroll at the Columbia University.

When Holmes was 14 years old, she took modeling classes at Toledo school. In 1996, she participated in the International Modeling and Talent Association’s Competition in New York. After this appearance, she was signed to an agent. Her agent sent a tape of her performing a monologue from To Kill a Mockingbird to the casting director if 1997 film The Ice Storm. The film became her debut role.

In 1997, Holmes traveled to Los Angeles to shoot a new pilot season for a show. It was reported that she was offered the lead role in Buffy the Vampire Slayer, but she turned the part down. Instead, Holmes was cast in the new show Dawson’s Creek. Holmes was at the time playing Lola of her school production Damn Yankees. For this reason, she could not attend the audition but was allowed to send a tape. Although the show was met with mixed reviews from the critics, Holmes gained a lot of attention.

While shooting Dawson’s Creek, Holmes also began working on film projects. Her first role of the time was in the thriller Disturbing Behavior in 1998. For the role, Holmes won the MTV Movie Award for Best Breakthrough Performance. The following year, she starred in the film Go, which received excellent reviews. In 2000, she starred in Wonder Boys and The Gift. For the latter, Holmes did her first nude scene, before her character was murdered. Her next movie project was Phone Booth, which became a critical and commercial success. In 2003, she starred alongside Robert Downey, Jr. in The Singing Detective. The same year, Dawson’s Creek ended its run and Holmes decided to focus on her movie career.

After wrapping up with Dawson’s Creek, Holmes first starred in the 2003 film Pieces of April. For the role, she received critical acclaim and the Satellite Award for Best Actress. In 2004, she starred in the film First Daughter. However, her most successful role was in the 2005 movie Batman Begins. She also had a small role in the 2005 film Thank You for Smoking, which was nominated for the Golden Globe Award for Best Motion Picture. In 2005, she agreed on a role in the biopic movie about Spade Cooley, where she was supposed to star as his wife. However, Holmes became pregnant and took a hiatus from acting until 2008.

After her hiatus, Holmes first rile was in the comedy Mad Money. For the role, Holmes received mostly negative reviews. The same year, Holmes also appeared in the television show Eli Stone and made her Broadway debut in the revival of All My Sons.

In 2009, Holmes starred in the ABC telemovie Don’t Be Afraid of the Dark. She was also cast as Jackie Kennedy in the TV miniseries The Kennedys. Her next Broadway role came in 2012 when she starred in the Therese Rebeck’s Dead Accounts.

Her directorial debut was in the 2015 documentary for ESPN Eternal Princess about the gymnast Nadia Comaneci. She is currently working on the adaptation of Kathleen Tessaro’s novel Rare Objects.

During her time on Dawson’s Creek, Holmes dated her co-star Joshua Jackson. In 2000, she met Chris Klein and became engaged in 2003. However, in 2005 the couple ended their relationship. Just a couple of months after her engagement broke up, Holmes began dating Tom Cruise. While they were dating, she began studying Scientology. The couple got engaged just several weeks after their meeting. In 2006, their daughter Suri was born, and they were married on November 18 same year.

Holmes filed for divorce from Cruise in 2012. Holmes got full custody of their daughter. After this, she returned to Catholic Church.