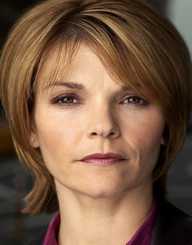 American actress Kathryn Erbe was born on the 5 July 1965 in Newton, Massachusetts to Richard Erbe and Elisabeth Magnarelli. She has two siblings: Jonathan and Jennifer.

Erbe completed the drama programme at the Tisch School of the Arts, New York University (1989).

Kathryn Erbe's acting career started in theatre. She was a member of the Steppenwolf Theater Company in Chicago and featured in many productions including A Streetcar Named Desire, My Thing of Love and Curse of the Starving Class. She also appeared in the stage adaptation of the Steinbeck novel, The Grapes of Wrath. In 1991 she received a Tony Award nomination for Best Actress for her appearance in The Speed of Darkness on Broadway.

In 1991, Kathryn Erbe won a Tony Award nomination for her role as Mary in Speed of Darkness. She was also nominated for a 2008 Satellite Award: Best Actress in a Series, Drama for Law & Order: Criminal Intent (2001).

Kathryn Erbe was married to Terry Kinney between 1993 and 2006 and has two children, Elsbeth and Carson.