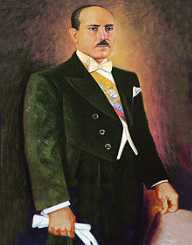 Juan Jose Flores was born on July 19, 1800. He was a politician. He was the first President of Ecuador. He served as the President of Ecuador three terms. His government was later overthrown due to ideological differences between him and some members of the Congress.

Juan Jose Flores was born on July 19, 1800, in Puerto Cabello, Venezuela. He was born to Juan Jose Aramburu and Rita Flores Bohorques. He was an illegitimate child since his father who was a merchant from Spain abandoned him and his mother and went back to Spain. He grew up in poverty since his mother did not have the money to send him to school. He was hired at a Spanish Military School where he worked in order to sustain and support his family. At the age of fifteen, he signed up for the Spanish Royalist Army. He signed up in the capacity of private and served under General Pablo Morillo.

Juan performed his job as a private very well that he was later appointed a sergeant. In 1817, he was captured by the enemies, and he met Simon Bolivar whom he was detained with. He came to accept the cause of freeing the region from the Spanish rule. He later joined Simon’s patriot army. He helped the army win a lot of battles as he was committed to the cause of freeing the region from Spanish rule. In 1821, the army won the Battle of Carabobo which saw Juan being appointed Colonel. He later became the Commandant General of the City of Pasto. In 1830, Ecuador was liberated, and he was appointed the Supreme Chief of the Country.

In the same year, he was appointed as a provisional president and later as the elected president of Ecuador. Juan, therefore, became the first President of Ecuador. The first for years of his presidency was not easy as he had to stop a rebellion that was held by Luis Urdaneta. He also faced challenges with Congressman Vicente Rocafuerte. In his presidency, he strived to defend the country against Columbian invasion. In 1835, he defeated the Columbians. In 1839, he was appointed as President for a second term. During his presidency in the second, he strived to promote peace and social justice. In 1843, he became President for a third term after he had annulled the constitution of Ecuador. Two years later his government was overthrown by a rebellion headed by Vicente Rocafuerte who later became the second President of Columbia.

He married Dona Mercedes Jijon with whom he has a son called Antonio Flores Jijon. He died on October 1, 1864, of uremia in Puna Island, Ecuador. At the time of his death, he was under house arrest. He was sixty four years old when he died.