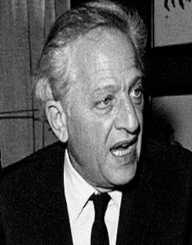 Although born in Connecticut, he grew up in Harlem and attended Morris High School in the Bronx. He graduated from high school in 1929.

After high school, Jules Dassin moved to Europe for a period and took acting classes. He returned to New York in the early 1930s, and from 1934 to 1939, he took on Yiddish acting roles with the ARTEF, which was a Yiddish Proletarian Theater.

He also joined the American Communist Party in the early 1930s but left the party in 1939.

Jules Dassin turned his talent to directing instead of acting, and rapidly became noted for exceptional work. He was highlighted as one of the best filmmakers in post-war America. Before the Second World War, He had directed six movies.

After the war, he directed six movies between 1946 and 1950. During this time, in 1948, Jules Dassin was called into the office of Darryl Zanuck and advised that he was going to be blacklisted. He still went ahead and directed Night and the City, but was blacklisted during filming.

In the post-war era, the Hollywood Blacklist was for those that worked in the entertainment industry, and who had ties to communism. The blacklist didn’t only pertain to those living in America, but distribution companies in the U.S. also blacklisted any European films from being distributed if Americans on the blacklist were involved with them in any way. This stopped Dassin from being able to work overseas at the time.

Jules Dassin managed to get some work in 1952 when Bette Davis hired him to direct her Broadway production, Two’s Company. The show didn’t run for long, and Dassin moved to France.

His next work as a director was in 1954, on the movie Rififi. He directed, wrote, and acted in the critically acclaimed film.

Between 1954 and 1980, Jules Dassin had 13 movies released. He directed all of them, produced eight of them, wrote ten of them, and acted in six of them. His later career was quite prolific. They were all European productions.

Jules Dassin’s most widely acclaimed movie was Rififi, released in 1955. It inspired later films such as Ocean’s Eleven, in the “heist” genre.

In 1955, Jules Dassin was named Best Director at the Cannes Film Festival (for Rififi)

In 1960, his movie, Never on Sunday, earned two awards. The Academy Award for Best Music, and also the Best Actress award at the Cannes Film Festival.

Jules Dassin married Beatrice Launer in 1937. She was a musician, born in New York. The couple had three children, who all went on to carve out careers for themselves in the entertainment industry. Dassin and Launer divorced in 1962.

His second marriage was to Melina Mercouri, a Greek actress. They fled Greece in the 1ate 1960s due to the political unrest and took up residence in New York City. When the military dictatorship in Greece ended in 1974, they returned to Greece and lived the rest of their lives there.

Jules Dassin was still married to Mercouri when she died in 1994.