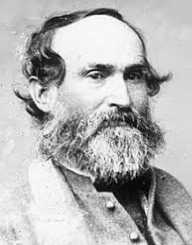 Jubal A. Early was an American lawyer and politician born in 1816 and died in 1894. Also, he served in the military in his early career before resigning in 1838. The graduate of United States Military Academy in 1837 would later study law. His great efforts in the First Battle of Bull Run in 1861 led to his promotion to brigadier general.

Jubal A. Early was born on November 3, 1816, in Virginia, Franklin County, in the United States. He had nine siblings born to their parents Joab Early and Ruth née Hairston. Sadly, in 1832 his mother passed on. Col. Jeremiah Early was his great grandfather.

Early attended Franklin County’s local private schools. Later, he studied in advanced private schools in Danville and Lynchburg. He joined United States Military Academy located in West Point, New York after passing probation. This was a year after his mother died. Young Early was an intelligent boy who took a keen interest in mathematics and Science.

In 1837, he graduated from the academy. He did quite well. Out of the 50 graduating cadets, Early was ranked the 18th. Also, in his engineering class, he secured the 6th position. Among some of the other cadets he studied with were Joseph Hooker, William H. French, and John Sedgwick.

Jubal A. Early began his career as a second lieutenant. He served in the 3rd U.S. Artillery regiment. However, in 1838 he resigned from the army.

Thereafter, he decided to pursue law and was admitted in 1840 to the Virginia bar. In 1841, he was voted among the delegates representing Franklin County in the Virginia House of Delegates.

In April 1861, early began his service as Colonel in the Confederate army. He later commanded the 6th Brigade of the Potomac Army. During the July 1861 First Battle of Bull Run, his army fought quite well. In return, he rose to the rank of brigadier general.

July 1864 was the climax of his career. This was while commanding the corps of the Army of the Valley District (the Southern troops) in Richmond Virginia. Thereafter, he also led other troops into victory. However, a later series of defeats led to the fall of the South. Finally, Early was relieved from his command position.

In 1866, after moving to Toronto, Canada, his memoir was published entitled A Memoir of the Last Years of the War of Independence in the Confederate States of America.

Early settled in Lynchburg in 1869. He then continued his historical essay writing. Also, he practiced his law career.