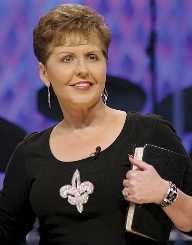 Joyce Meyer was born Pauline Joyce Hutchison on June 4, 1943, in St. Louis, Missouri, United States. Her father largely remained away from home after her birth, as he was busy fighting the World War II as a U.S. Army man. Her mother raised her. Her nightmare started after her father’s return from the Army. He was like a monster and started abusing Joyce sexually, verbally, and emotionally. Joyce was shattered with the atrocities perpetrated upon her by her father, and the exploitation had a telling effect on her. The very fear of her torturous existence had a deep, lasting impression on her.

Gradually Joyce Meyer developed a derogatory sense of self. Several complications engulfed her day to day life. She had multiple personality disorder feeling insecure all the time and at the same time filled with a sense of self-pity. She was attending school but could never concentrate on what was being taught and did not participate in any after-school activities. She was not manageable and was manipulative and ill-behaved. A sense of guilt and negative thinking, eying everything with suspicion was all her behavioral abnormalities.

Despite all these problems, Joyce Meyer continued her studies and graduated from the O’Fallon Technical High School in St. Louis. At the outset, she looked like a completely normal girl with no visible signs of her severe personality disorder.

Joyce Meyer married a part-time car salesman after her senior year in high school. Though the marriage lasted only for five years, Joyce leveled charges of frequent cheating on her husband and of provocation for stealing the payroll checks from her employer. According to her confession, they spent the stolen money on vacation in California and claimed to have returned the money years later.

Joyce started frequenting the local bars after their divorce. She met Dave Meyer, an engineering draftsman at this juncture. They got married on January 7, 1967. Dave was successful in transforming her. His care, support, and constant encouragement had a calming influence on Joyce.

It was on a 1976 morning when Joyce Meyer was driving her car to work, that she claimed to have received a personal message from God. After the incident, everything changed. She developed a strong personality and started to deliver lectures where she professed that she can now interpret God’s words and have the ability to understand and comprehend it thoroughly.

CAREER AS A RELIGIOUS PREACHER

Joyce Meyer became a member of Our Savior’s Lutheran Church in St. Louis and also started teaching Bible in an early morning class of a local cafeteria. She actively involved herself in Life Christian Centre, a fascinating church in Fenton. She was appointed as the Associate Pastor of the Church within a few years. Gradually, her popularity as a Bible teacher increased. She started airing a 15-minute radio program from the local St. Louis radio station. In 1985, she resigned from the post of Associate Pastor and established her ministry. Initially, it was named ‘Life in the Word.’ Meanwhile, six more radio stations from Chicago to Kansas City started airing her radio broadcast.

In 1993, Joyce Meyer ventured into television as well. Strongly persuaded by her husband, the Meyer couple started a television ministry. It was aired on superstation WGN T.V. in Chicago and Black Entertainment Television (BET) in the initial days under the name ‘Enjoying Everyday Life.’ The program became a huge hit and is on air till date. The program is now being broadcasted in 40 languages on 900 T.V. and radio stations catering to a whopping 4.5 million viewers across the globe. It has 12 satellite offices employing more than 1000 workforce including its headquarter in Missouri.

The main topics on which Joyce Meyer focused her attention during the broadcast are mind, mood, mouth and the attitude. She often cites her practical experiences and the lessons she learnt from them. Her interpretation and method of teaching Bible are also unique and quite useful in approach.

Joyce Meyer has written more than 100 books over the years, and these books have been translated into more than 100 languages catering to almost 12 million readers. She is one of the New York Times’ bestselling authors of all times. Besides hosting television shows and writing books, she also organizes and conducts various national and international conferences to motivate people, so that they can live a successful and happy life enjoying every aspect of life to the fullest. Her ‘Hand of Hope’ foundation was created to alleviate the sufferings of the needy, providing food, shelter and medical care. The foundation is also engaged in disaster relief supplies.

In 2000, Joyce Meyer co-founded the St. Louis Dream Centre. The focus of the centre is to cater to the people in distress with hands-on programs targeting the needy, lost and hurt through the love and affection of Jesus Christ. Joyce Meyer Ministries added another feather to their repertoire when Evangelical Council for Financial Accountability (ECFA) accorded its accreditation to the organization.

Though Joyce Meyer has earned name and fame over the years for her groundbreaking work for the welfare of the society, her detractors were up in their arms criticizing her extravagant lifestyle and for being too profligate. She, in turn, has stoutly defended all these criticisms by claiming to be ‘blessed.’ In her opinion, she did not need to defend her lifestyle at all for being ‘blessed.’