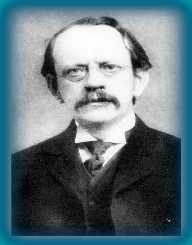 J J Thompson was a prominent English Physicist and Nobel Prize in Physics winner. Born on December 18, 1856, he won the Prize in 1906 for his work on the conduction of electricity in gases.J J Thompson is credited as the discoverer and an identifier of electrons and the first subatomic particle.J J Thompson proved in 1897, that cathode rays were made up of unknown negatively charged particles, which J J Thompson assumed might be smaller than atoms and have very large values for their charge-to-mass ratio.

In 1913, J J Thompson explored the composition of canal rays (positive ions) through which J J Thompson discovered the first evidence of the existence of isotopes of a stable state (non-radioactive) element.J J Thompson worked with Francis William Aston were the first to use the mass spectrometer in their experiments to determine the nature of positively charged particles. This also led to the development of the mass spectrograph.

J J Thomson was born to Joseph Tames Thompson and Emma Swindells on December 18, 1856, in Cheetham Hill, Manchester, Lancashire in England. He had a younger brother Frederick Vernon Thomson. He started his education in a small private school, where he developed an interest in the field of science. He then enrolled at the Owens College in Manchester, currently the University of Manchester in 1970 at the age of fourteen.

His parent also sought to enroll him for an engineering apprenticeship at the Sharp-Stewart & Co. a locomotive manufacturer. This plan was however abrogated after the death of his father in1873. In 1876, moved to Trinity College, Cambridge, where he obtained a Bachelor of Arts degree in mathematics in 1880. He then gained a Fellowship at the university in 1881 and received his Master of Arts degree in 1883 winning the Adams Prize for his work Treatise on the motion of vortex rings.

The University of Cambridge appointed J J Thomson as the Cavendish Professor of Experimental Physics Thomson on December 22, 1884. The appointment of Thomson, who was relatively young at the time came as a surprise to many as there were experienced candidates including Richard Glazebrook and Osborne Reynolds. That same year, he was elected a Fellow of Royal Society. From 1915 to 1920, J J Thomson served as the President of the Society. Thomson became Master of Trinity College, Cambridge in 1918 and remained there until his death. Thomson was knighted in 1908, and in 1912, created an Order of Merit.

While pursuing his masters, J J Thomson developed the mathematical description of William Thomson’s vortex theory of atoms. He also published some papers, which mathematically and experimentally addressed issues of electromagnetism. Thomson studied James Clerk Maxwell’s electromagnetic theory of light through which he introduced the concept of the electromagnetic mass of a charged particle and proved that a moving charged body would apparently increase in mass. In 1888, He published Applications of dynamics to physics and chemistry and followed it with Notes on recent researches in electricity and magnetism 1893. J J Thomson also came out with Elements of the mathematical theory of electricity and magnetism in 1895.

In 1897, J J Thomson suggested that there are much smaller particles, which were 1000 times smaller than an atom and suggested subatomic particles currently known as electrons. He made this discovery by exploring the properties of cathode rays concluding that the rays were made up with very light negatively charged particles, which were a universal building block of atoms. He, therefore, named it corpuscles which were later renamed the electron as suggested by George Johnstone Stoney in 1891.

J J Thomson suggested the model of an atom in 1904, postulating that it was a sphere and made up of positive matter within which electrostatic forces determined the positioning of the corpuscles. J J Thomson won the Nobel Prize in 1906, "in recognition of the great merits of his theoretical and experimental investigations on the conduction of electricity by gases." He discovered the natural radioactivity of potassium in 1905 and in the following year demonstrated that hydrogen had a single electron per atom. There were previous suggestions that it contained several electrons.

J J Thomson won several awards and honors for his works including the Adams Prize, 1882, Royal Medal, 1894, Hughes Medal, 1902, Elliott Cresson Medal, 1910, Copley Medal, 1914 and the Franklin Medal in 1922. He was an elected Fellow of the Royal Society. He was posthumously named after the unit to measure mass-to-charge ratio in mass spectrometry, Thomson(symbol: Th) in 1991. Thomson was knighted in 1908 and 1912 was appointed to the Order of Merit.