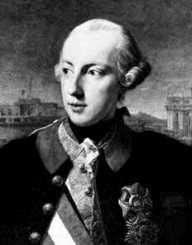 Joseph II was born on March 13th, in 1741. He earned his fame for being a Holy Roman Emperor and Habsburg lands’ ruler. During his tenure, Joseph II brought numerous changes particularly in fostering for education and equality in the society. Nonetheless, his reforms were quite slow which greatly contributed to more problems in his kingdom. He passed away at the age of 48.

Joseph II did not take full control of the Roman kingdom. On the contrary, he had to share power with his mother, Theresa. His main duty was to ensure that army issues and foreign affairs were well streamlined. One of his main missions was to trade Bavaria with a portion of Austrian Netherlands. However, this foreign affairs mission failed. His mother Theresa played an important role in ruling over the empire. In 1780, Joseph II’s mother passed away. This gave him full power of the entire kingdom. This was also an opportunity for him to pass laws that his mother had objected when she was alive. In one year, he passed up to 690 statues. This was a big gap compared to what his mother used to pass in a single year. Theresa used pass less than 100 statues in a year. Part of his notable reforms was to reduce the power that the Catholic Church had. In addition to this, he strived to put an end to serfdom.

In 1781, Patent of Tolerance was established. This was a move that ensured minority religions had the opportunity of worshiping freely. Some of these religions included the Jews, Greeks, and Protestants. Joseph II’s reign did not flow smoothly. This was influenced by the conflict that he created with the Roman Catholic Church. His idea of depriving bishops their powers was not in line with the church’s ideologies. He went forth to close down hundreds of monasteries. The number monks were also lowered by 27, 000. Similarly, the number of holy days was not only reduced, but the Mass patterns were also altered.

Legally, there were several reforms that he also made. For instance, he eliminated brutal punishment and death penalty. His new system also guaranteed that there was equal treatment of all offenders. Land values were also appraised following his command.

In 1760, Joseph II tied the knot with Princess Isabella. She was from the Parma kingdom. The two welcomed a daughter in their relationship. They named her Maria Theresa. In 1765, he married for the second time due to political pressures that were facing him. This time round, he wedded Princess Maria Josephs, who was his second cousin. His second marriage was short-lived as it only took two years before Maria Josephs passed away due to smallpox.

Joseph II passed away on February 20th, in 1790. Sadly, his death came as a blessing as people did not mourn him. This was due to his reforms that were quite unpopular. He was 48 years at the time of his demise.