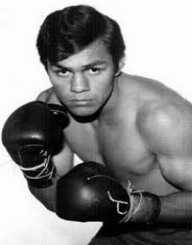 José "Pipino" Cuevas was born on December 27th, 1957. He grew up in Santo Tomás de los Plátanos, Mexico. He came from a family of eleven siblings. Cuevas made extra money by working as a shoe shiner as well as at his father's butchery.

He often walked into a gym to grow his skills as a young street fighter.

José "Pipino" Cuevas kicked off his professional boxing career at the age of 14. Unfortunately, he lost his first fight in a second-round knockout. Young "Pipino" then became more aggressive and hungry for titles. He won his next seven out of eleven fights by knock-out by the age of 16.

At the age of 17, Cuevas won the Mexican welterweight title when he knocked out Jose Palacios in the 10th round.

His most notable career fight and win came in 1976, becoming the youngest welterweight champion in boxing history. Cuevas had knocked out Argentinean Angel Espada in the second round when the two fought in San Juan, Puerto Rico. Espada boasted of a fantastic (84-4-4) record.

In 1977, José "Pipino" Cuevas faced off with Canadian veteran boxer, Clyde Gray, who had only lost two fights in his entire career. He successfully defended his title and what followed was another 11 consecutive wins.

José "Pipino" Cuevas' amazing record came to an end on August 2nd, 1980 when he fought against the undefeated Thomas "Hitman" Hearns in Detroit. Cuevas excellence began to decline post this loss, and he dropped from the ranks of boxing. In 1983, he fought against Roberto Duran and lost the bout in the fourth round.

José "Pipino" Cuevas retired from boxing after a failed return in 1989. He had lost his third fight against Luis Aquino. He ended his career with a total of 31 knockouts in a 35-15 record. Cuevas later ventured into business, owning a security firm and a restaurant in Mexico City.