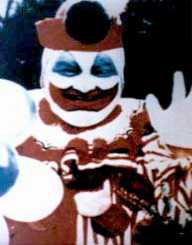 American serial killer John Wayne Gacy was born on the 17 March 1942 in Chicago, Illinois. He was one of three children having an older sister Joanne and a young sister Karen. His childhood was normal, and he was said to be a quiet boy who was happy to do odd jobs for pocket money. During his teenage years, Gacy had a problematic relationship with his father but got along well with his mother and his two sisters. His father, an alcoholic, was said to be physically abusive to both his wife and his three children.

His education suffered from his problems at home, and Gacy attended four different high schools without graduating. He left home and worked at a funeral parlor in Las Vegas for three months, then returned home and enrolled at the business college.

At business college, John Wayne Gacy discovered that he had a flair for marketing and sales. He joined the Nunn-Bush Shoe Company and did various management trainee courses. In 1966, during his first marriage, he managed three KFC stores which his father-in-law owned in Waterloo.

Gacy joined the local Jaycee movement during his time in Waterloo, and his wife gave birth to two children: Michael (b.1966) and a daughter Christine (1967). At this time he also reconciled with his father. Although life looked perfect on the surface, it is now known that there was a seedier side going on with wife swapping, prostitution and parties in the basement of his house with young male employees.

Gacy sexually assaulted a teenage boy in August 1967. The boy Donald Voorhees was lured to his house on the pretext of viewing pornographic films. The youth reported the assault to his father who went to the police. Gacy was arrested and denied all charges, even offering to take a lie-detector test. On the 10 May 1968, he was indicted on sodomy charges.

Gacy enlisted one of his employees, an eighteen-year-old, Russell Schroeder to intimidate Voorhees not to testify against him. After the threats and physical violence against him by Schroeder, Voorhees reported the incident. Gacy was assessed by medical authorities who diagnosed him as having an antisocial personality disorder; with psychopathic tendencies. They said no treatment would be of any benefit and predicted that he would re-offend. They also declared him mentally fit to stand trial.

Gacy was tried on the 3 December 1968 and sentenced to ten years in prison. He was a model prisoner and served 18 months before being given parole. His first known killing was the murder of Timothy McCoy in 1972, the same year he married for the second time.

In 1974, Gacy started his own decorating and maintenance business which became quite successful. He was involved with the Jaycee movement and developed a character Pogo the Clown to raise funds for charity.

Between 1972 and 1978 John Wayne Gacy raped, tortured and murdered over thirty young men. He was apprehended in 1978 when police became suspicious of him over the disappearance of a young man in the area. Gacy was arrested after he lured Robert Priest, a high school student, to his home on a pretext of a job in his construction company. The boy’s mother told police that her son had arranged to see a man about a construction job and the police worked out that the man was Gacy. When checking his background, police discovered the earlier charge of sodomy and his subsequent imprisonment. They became highly suspicious and put him under surveillance.

In 1978 at the time of his arrest, The Chicago Tribune named Gacy, the country’s worst serial killer. Police investigators found 29 bodies, all young males, in the crawlspace of Gacy’s home. Eight of the victims were never identified.

His defense attorneys pleaded insanity, but he was sent to a trail and found guilty in 1980 of 33 counts of murder.

Gacy spent fourteen years on death row and died by lethal injection in 1994 at the Stateville Correctional Center in Joliet.

At the time of his trial in 1968, his wife, Marlynn Myers, petitioned for divorce. The divorce went through in September 1969, and he never saw his first wife or two children again. Gacy remarried in 1972 when he met Carole Hoff. They divorced in 1976 after he advised her that he was bisexual.