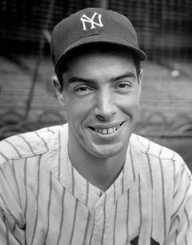 American baseball legend Joe DiMaggio (born Giuseppe Paolo DiMaggio) was born on November 25, 1914, in Martinez, California. his parents were immigrants from Italy, who moved from Sicily to California in 1898. The family had eight children.

DiMaggio’s father was a fisherman, as were many of his ancestors. He wanted his sons to enter the same trade. Joe never had any interest in fishing, but his upbringing in poor conditions later helped to shape his image as the personification of American Dream.

Since Joe DiMaggio had no interest in fishing and coming along with his father on the boat, he had to find something else to do. DiMaggio followed his brother to the San Francisco’s baseball fields. In the playground, he quickly became known as a legend. DiMaggio attended the Galileo High School, but dropped out at 16 years of age, when he decided to dedicate his life to baseball. After this decision, DiMaggio started to play daily at the dairy-wagon parking lot and used rocks for bases.

DiMaggio started to play in a local league, which was sponsored by local oil distributor company Rossi. DiMaggio led his team to the league championships, which earned him two baseballs and $16 worth of merchandise. In 1932, his older brother, who introduced him to baseball, was signed by the San Francisco Seals. Close to the end of his first season, the club’s shortstop was injured. Vince DiMaggio suggested his brother as a replacement. After playing the last games of 1932 season, DiMaggio was signed to a permanent position with the Seals in the next season.

DiMaggio’s first season with the Seals was a success. He batted .340 with 28 home runs and achieved a 61-game hitting streak. His following two seasons were increasingly successful, batting .341 in his second and .398 in his third season. After this, DiMaggio gained recognition in the major leagues and was sold to the New York Yankees for $25,000 and five players. Besides his natural talent, DiMaggio was also known for his impeccable work ethic.

DiMaggio’s debut with the New York Yankees was on May 3, 1936. His rookie season, DiMaggio batted .323 with 29 home runs. In his first four seasons, the Yankees went to win four consecutive World Series. This made DiMaggio the only athlete in North American professional sports history to win championships in each of his first four seasons. He was made the American League’s Most Valuable Player in 1939.

Besides his batting skills, DiMaggio was also extremely skilled centerfielder and base runner. In 1941 season, Yankees again won the World Series, and DiMaggio set a record of hitting safely 56 consecutive games.

In 1946, DiMaggio returned to the Yankees and experienced an amazing season in 1947. That year he won the American League MVP award for leading the Yankees to the World Series. DiMaggio decided to retire after the 1951 season, after winning three consecutive World Series in the previous years. His decision was based on having too many injuries and constant pain, which made the sport no longer fun for him. In 1955, DiMaggio was inducted into the National Baseball Hall of Fame.

In 1939, Joe DiMaggio married Dorothy Arnold. The couple had a son, Joe III, but they divorced after five years of marriage. After his retirement from baseball, DiMaggio met Marilyn Monroe and fell in love with her. This was one of the most high-profile romances in the American history. The couple dated for 18 months and married in 1954. The press called it The Marriage of the Century.

The marriage had problems from the early beginning. At the time, Monroe’s career was skyrocketing, but DiMaggio was looking to settle down. The marriage lasted only for a year, but the two remained close friends. After her death, DiMaggio continued to deliver roses to her crypt three times a week, for the next 20 years.

DiMaggio led a peaceful life after his retirement but continued to be a public figure. He appeared on the radio and television as a spokesman for several products. At the end of his life, DiMaggio had lung cancer and died in 1999, at the age of 84 years.

DiMaggio has often been praised as the representation of the best in America. After his death, president Bill Clinton stated that America had lost one of its most beloved heroes.