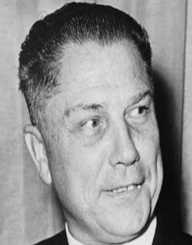 Known for his influence in Teamster Union, Jimmy Riddle Hoffa was born in Brazil on February 14, 1913. He was a labor union enthusiast. He served a sentence for conspiracy, fraud and tampering with the jury in 1967.

After his father's demise in 1920, his family migrated to Detroit, where Jimmy Hoffa spent the rest of his life.

To support his family, he was forced to leave school at the age of 14. There have been contradicting reports however on whether Jimmy went to high school or not.

His first-hand experience of workers' challenges led him to union activism at a tender age.

Just like his father James P. Hoff is serving as the president and attorney of Teamsters Union from 1998 to date.

Jimmy Hoffa held the International Brotherhood of Teamsters leadership for more than a decade. Under his leadership, IBM membership rose to 1.5 million workers. His aggressiveness helped IBT success; members received improved contracts. He managed to bring together almost all truck drivers in the U.S to a similar arrangement.

In a convention held in Atlanta, a vote to expel IBT was done. George Meany, the U.S president, made his intentions clear. Unless the union expelled Hoffa as their president, he would not recognize the union.

His work, however, was not a walk in the park, almost all major security organs were on him. It was alleged that Jimmy used organized crime to advance the union. After his release from prison in 1971, he was banned from holding any leadership position in the union.

Jimmy Hoffa's first prosecution came in 1957; he, however, managed to avoid conviction since there was a hearing on his issue in the Senate.

After several attempts to pin down Jimmy on various crimes, the persecution finally proofed that he was guilty of jury tampering and bribery. In addition to these charges, he was convicted of improper use of union's funds.

His 13 years sentence started in 1967 but ended four years later after Richard Nixon the U.S president used the Mercy of The President law to let him out.

Jimmy Hoffa left home his home using his car on July 30, 1975, which was later found in a restaurant parking lot; Hoffa was not to be seen again. Many theories on his disappearance have been put across some blaming organized crime others pointing a finger on federal agents.

He was confirmed officially dead on July 30, 1982; his body is yet to be found. A conclusion on the cause of his death has never been finalized.