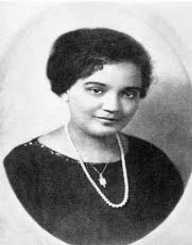 African-American poet Jessie Redmon Fauset was born on the 27 April 1882 in Camden County, New Jersey in the United States and raised in Philadelphia. Her mother died young, and her father remarried and had another three children. Fauset’s half-brother was Arthur Huff Fauset, the author of American Negro Folk-Lore.

After graduating from Philadelphia High School for Girls she became the first black female student at Cornell University. Obtaining a BA in classical languages in 1905, she then did an MA at the University of Pennsylvania in 1919. She also studied in France at the Sorbonne and the Alliance Francaise.

Early in her career, Fauset taught in Washington D.C. and Baltimore before in 1912, she started contributing to The Crisis, the NAACP’s official magazine.

Fauset was appointed literary editor of The Crisis in 1919 and she relocated to New York City to take up the position. During her time as editor of The Crisis, she worked with writers such as Anne Spencer, Countee Cullen, Claude McKay, and Langston Hughes. Fauset worked with Charles Johnson and Alain Locke to encourage black writers in what became known as the New Negro literary movement. Fauset continued writing short stories and poetry and also published various novels including Plum Bun (1928), There is Confusion (1924) and Comedy, American Style (1933). In 1926, Fauset resigned from The Crisis and taught French at high school level.

She married Herbert Harris in 1929, they lived in New Jersey. After the death of her husband in 1958, Fauset spent her later years living in Philadelphia and died there on the 30 April 1961.