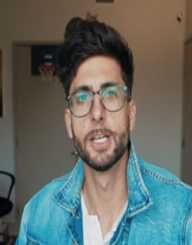 The inception of social media has made achieving fame and stardom very easy. With just the creation of an account and the click of a button, one can sell their talent to the rest of the world without any hectic task. Today, one does need a manager, producer and all the other monopolies of the past make it happen. With this, most of the youth of today has left nothing to chance and are using the likes of YouTube, Instagram, Twitter, Vine and Facebook among other as a publicity tool. Social media has also made scouting for talent very easy as people that are more talented upload their videos on the platforms. One such person taking advantage of social media is Jesse Wellens.

Born on September 25, 1982, Jesse Wellens is an American social media fanatic who is making the best out of his social media accounts. Today he has millions of followers and fans on his various platforms and his prank videos, are just breathtaking. As of April 2017, his channel‘PrankvsPrank’had over 10 million subscribers and over a billion views. ‘PrankvsPrank’was created in collaboration with his partner-in-crime JeannaSmith, who was also a social media star.

Jesse Wellens was born on September 25, 1982, in Philadelphia, Pennsylvania to Steven and Stella Wellens. He has a brother, Anthony Wellens and a sister Candice Wellens. Wellens educational background and other childhood information are unknown.

Thanks to social media, broadcasting one's talent have become very easy. Jesse Wellens announced his social media presence in 2007 by collaborating with Jeam Smith to create the YouTube channel ‘PrankvsPrank.’With that humble beginning, the channel has over 10 million subscribers as of April 2017. On the channel, the two post videos of them playing pranks on others. These videos can absolutely take you off the hook to scream in surprise and were accepted instantly by fans gaining them many fans. Today the duo has become a household name when it comes to making prank videos.

Wellens rose to stardom with his crazy prank videos based on different concepts. The amazing thing is that Wellens and his prank partner Jeanna do not repeat pranks no matter how famous it became. Wellens and Jeannastand out of other pranksters on YouTube due to the quality of videos they produce. Wellen has played several prank concepts including pretending to cheat on his girlfriend Jeanna which generated many likes. There are several others which make fan call for more and more.

Jesse Wellens was in a long-term relationship with Jeanna Smith, which span from 2005 to 2016. The relationship became a talk of town especially on the internet among fans of both. The two after more than a decade commitment sadly hit the rock. There was a rumor that Wellens cheated on Jeanna with a stylist and social media star, Kristina Askereva and that caused their breakup. Wellen revealed through his social media account that he had a daughter who has been adopted.