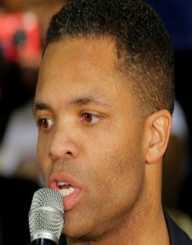 Jesse Jackson Jr. was born on March 11, 1965, in Greenville, South Carolina, the U.S. His political career sprouted from his father Jesse Jackson who was an ardent activist and politician. His father vied for the 1984 presidential election where Jackson Jr. played a role in the campaigns. In later years, he followed in his father’s footsteps to venture into politics.

He was elected as Democrat Congressman for Illinois 2nd District in the U.S House of Representatives in 1995. He served until his resignation on November 21, 2012, after his leadership was faced with integrity issues. He was accused of misuse of campaign funds and other counts of offences including mail fraud. He was convicted on August 14, 2013, and was sent to federal prison for a 30 month sentence.

Jesse Jackson Jr. was born Jesse Louis Jackson Jr. on March 11, 1965, in Greenville, South Carolina. He was born in a family of five to Jesse Jackson and Jacqueline Brown Jackson. He went to John J. Pershing Elementary School and later studied at Le Mans Military Academy in Rolling Prairie, Indiana with his brother. He became the Company Commander while at Le Mans but was suspended having repeated ninth grade.

He completed his education at St. Albans School in Washington D.C in 1984. He enrolled at North Carolina A&T University and graduated in 1987 with a Bachelor of Science degree. Jackson also went to Chicago Theological Seminary and earned his master’s degree but opted out of ordination. In 1993, he received his Juris Doctor (J.D) from the University Of Illinois College Of Law.

Jesse Jackson Jr. began his career as a teenager by supporting his father’s presidential campaign agenda. Together with his two brothers, he became active in propagating civil rights activities in the 1984 Democratic primaries. He worked as an Executive director for the Rainbow Coalition immediately after college where he promoted voters registrations and educational programs.

A year later after his graduation from college of law, Jackson took to active politics. He became a member of the United States House of Representatives for Illinois having won the seat in 1995. Jackson served for three terms advocating for a number of developments and legislative projects. He was also active in the presidential campaigns for Barack Obama and funded AIDS service organization for the blacks. He was also among those who fought for election reforms in America.

As an active Democrat politician, Jesse Jackson Jr. was not without flaws. He was accused of misappropriation of campaign funds for personal gain. Investigations began in October 2012 by the FBI just sixteen days after his re-election for the fourth term. The charges questioning his integrity were so devastating that led to him taking an early resignation. He effected his resignation on November 21, 2012, for health reasons and giving room for investigations.

The case was presented before the juries in February 2013 where Jackson was accused of misusing 750, 000 U.S Dollars. He was also charged with mail fraud and pleaded guilty on February 20, 2013, and was sentenced to 30 months in federal prison. His wife was also charged and pleaded guilty for conspiracy and filing false tax returns. She was sent to serve 12 months in jail; however, his wife was locked shortly after Jackson was released on March 26, 2015. After his release, he was to be monitored and stay supervised for three years. He was officially released from the home detention on June 22, 2015, after serving for three months.

Jesse Jackson Jr. met Sandi Stevens whom he met in 1988, and they got married in 1991. They have two children Jesse III and Jessica, and they live in Washington D.C. He is currently fifty three years old.