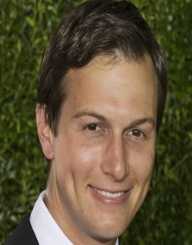 Jared Corey Kushner is an American newspaper publisher, real estate developer, investor, and currently the senior advisor to his father-in-law US President Donald Trump. Born on January 10, 1981, he is the husband of Ivanka Trump. He co-founded and is a shareholder if the online real-estate investment platform, Cadre.

Jared Kushner served as the chief executive officer of the real-estate holding and development firm Kushner Companies and the Observer Media, which publishes the New York Observer. He played an instrumental role in Trump’s 2016 presidential campaign by helping to develop and the running of the campaign’s digital media strategy.

Jared Corey Kushner was born on January 10, 1981, in Livingston, New Jersey to Charles Kushner and Seryl Kushner (née Stadtmauer). His grandparents, Reichel and Joseph Kushner survived the Holocaust and moved from Navahrudak, Belarus to the United States in 1949. Kushner three other siblings: two sisters and a brother, Joshua.

Raised in a modern orthodox Jewish family, he received education at Frisch School. He was a member of the school’s baseball, hockey, and debate teams. After graduating, he enrolled at Harvard University in 1999, graduating in 2003 with a Bachelor of Arts degree in government. He later enrolled at the New York University, graduating with dual JD/MBA degrees in 2007.

In 2008, Jared Kushner became the CEO of the family company, Kushner Companies. The company had in the previous year, purchased the office building at 666 Fifth Avenue for 1.8 billion, which was then a record price. Kushner’s assumption of office met the 2008 property crash that necessitated the company to offload their retail footage to Stanley Chera to be able to service their debt. They also brought in Vornado Realty Trust as a 50% equity partner in the ownership of the building.

The market crash also resulted in Kushner losing over $90 million of its investment. Kushner embarked son several major deals for the company including acquiring 50.1% stakes in Times Square Building from Africa Israel Investments Ltd for $295 million. He was able to expand the Kushner Companies’ presence in the New York City real estate market.

Jared Kushner purchased the weekly New York City newspaper, The New York Observer, for $10 million in 2006. He converted the publishing format of the newspaper into a tabloid format after the purchase. The New York Observer has since, gained higher online presence and the Observer Media Group has since become profitable. In 2017, he stepped down to take office in President Donald Trump’s administration and was succeeded by his brother-in-law.

Entry into Politics and Trumps Campaign

Jared Kushner is a Democrat and has supported the party in various ways before his father-in-law, Donald Trump entered into politics. He, however, joined Trump’s election campaign in 2015. He had no prior experience in campaign politics while joining Trump’s campaign. He took over the digital, social media and online campaign and brought in other talents from Silicon Valley to manage the social-media team called "Project Alamo." He also acted as a speechwriter, became the de-facto campaign manager and Trump’s confidant.

Appointment as Senior Advisor to Trump

Jared Kushner was appointed Senior Advisor to President Trump on January 9, 2017. After the appointment, he resigned from his position as CEO of Kushner Companies and publisher of the Observer. Being the president’s son-in-law Kushner’s appointment was thoroughly scrutinised based on the 1967 anti-nepotism law. To clarify the situation, the Department of Justice Office of Legal Counsel in an opinion on January 20, 2017, stated, "The President may appoint relatives to his immediate staff of advisors." On January 22, 2017, he was sworn into office.

He has worked in diverse capacity since his appointment including brokering peace between Israel and Palestine. He was in Israel to meet Prime Minister Benjamin Netanyahu on August 24, 2017, after which he travelled to Palestine to meet President Mahmoud Abbas to engage them in peace talks.

Jared Kushner has been fingered in the Russian investigation for the alleged meddling of Russia in the 2016 US Presidential elections. He has met some Russians in four different meetings during the 2016 campaign and transition period. However, he says none of the Russian contacts was improper. He appeared before the House and Senate intelligence committees in July 2007 as part of the investigations.

The Senate Judiciary Committee demanded some documents from Kushner in October 2017, which his attorney delivered on November 3. The committee further demanded additional documents on November 16. That same month investigators from Special Counsel Robert Muller’s office interviewed him in his involvement of the alleged meddling.

Jared Kushner married Ivanka Trump in a Jewish ceremony on October 25, 2009. They have three children. They are Modern Orthodox Jews, with Ivanka converting to Judaism in 2009. Kushner and Ivanka, according to federal disclosure have assets worth between $240 million and $740 million.