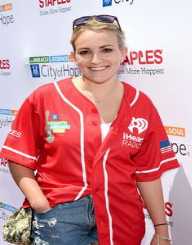 Jamie Lynn Spears is an American actress and singer who is best known for her portrayal of Zoey Brooks in Zoey 101.

Jamie Lynn Spears was born in McComb, Mississippi on 4 April 1991. Her parents are James and Lynne Spears. Spears’ father was a construction contractor, and her mother worked as grade school teacher. Spears has two older siblings, Bryan and Britney. Spears’ sister Britney is a world-famous pop star. Spears and her siblings were raised as Baptists. She attended Parklane Academy, a private Christian school. While attending Parklane Academy, Spears played point guard for the basketball team as well as being a cheerleader. Spears moved with her mother and sister and had to complete her high school education online.

Jamie Lynn Spears made her acting debut appearing in Crossroads. The film was a vehicle to launch Britney Spears acting career, and Jamie Lynn made a minor appearance playing a younger version of her sister’s character. Spears was cast by Nickelodeon in their live-action comedy series, All That, in 2003. Spears was an art of the main cast for the eighth and ninth seasons of the show. Spears received praise for her performances on the show, and her comedic timing, in particular, drew positive feedback. Spears was then given her TV series to play the lead in. The show would become Zoey 101 and Spears would sing the theme song, Follow Me. The show was Nickelodeon’s most expensive production ever. The show was set in a fictional boarding school named Pacific Coast Academy. The Pepperdine University in Malibu, California provided the location for filming the show.

Spears sister wrote the theme song, and her brother Bran was a producer on the show. The show focused on Spears character and her friend’s struggles with teen problems. The show ran for four seasons and sixty-one episodes. The final episode of the show had the largest viewership of any Nickelodeon live action show ever, 7.3 million. Spears later moved to Nashville to pursue a music career. Her debut single, How Could I Want More, was released in 2013 and reached twenty-nine on the Billboard country charts. In 2016 Spears released a second single which was titled, Sleepover.

At just sixteen years of age Spears announced she was pregnant in 2007. Her boyfriend at the time, eighteen-year-old Casey Aldridge, was the father. In 2008, Spears gave birth to a daughter, Maddie Briann. Following the birth, Spears and Aldridge were engaged and bought a house together in Mississippi. The engagement ended in 2009 and Spears left Aldridge and their home in 2010. Spears pregnancy was controversial and is seen by many as having undermined her acting career. Many condemned her and felt she glamorized teen pregnancy and it was wrong for the star of a children’s TV programme to be having a child so young. Nickelodeon refused to condemn Spears and wished her all the best. Spears married Jamie Watson in 2014.