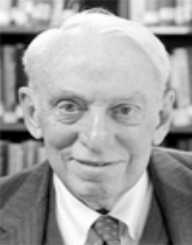 James Tobin was born in Champaign, Illinois on the 5 March 1918. His mother Margaret Edgerton Tobin was a social worker, and his father Louis Tobin was a journalist and publicity director for athletes at the University of Illinois.

Tobin also did a three-month officer’s course at Columbia University during WW II.

In 1941 after doing three years graduate work at Harvard University as a junior fellow, Tobin joined the Office of Price Administration and Civilian Supply and the War Production Board in Washington, DC.

During World War II Tobin joined the US Navy and spent four years as an officer a destroyer in the Atlantic and Mediterranean.

James Tobin returned to Harvard in 1946-1947 and finished his Ph.D. A further three years at Harvard followed after Tobin was appointed Junior Fellow of the Society of Fellows.

In 1951 Tobin took up a position as an associate professor of economics at Yale University, becoming the Sterling Professor of Economics in 1957. He was also the director of the Cowles Foundation for Research in Economics serving two terms: 1955-1961 and 1964-1965.

From January 1961 until July 1962 Tobin took leave from Yale to become a member of President Kennedy’s Council of Economic Advisers. He was a co-author of the President's 1962 Economic Report. Tobin once referred to the report as a manifesto of Keynesian economics. He served as president of the American Economic Association in 1970. In 1972 Tobin was an adviser to George McGovern when he ran for president.

Tobin was a prolific author who wrote or edited sixteen books and hundreds of scholarly articles and essays.

Tobin conceived Tobin Tax, a small tax on foreign exchange transactions in the 1970s. Other concepts named after him include Tobin’s q and the Tobit.

Professor David Moss, an economic and policy historian at Harvard Business school, founded the Tobin Project after Tobin’s death in 2002. The project aimed to facilitate scholarship on society’s problems.

James Tobin married Elizabeth Ringo in 1946. The couple had four children, three sons, and a daughter and remained married until Tobin’s death in 2002.

The writer Herman Wouk, a colleague from Tobin’s Naval Reserve training later wrote the bestselling The Caine Mutiny and modeled his character Tobit on Tobin who was a friend of his.