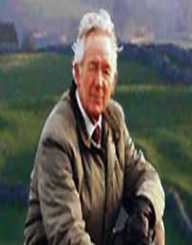 James Herriot was born on October 3, 1916, in Sunderland, County Durham, England. He was an English writer and veterinary surgeon whose association with animals led him to write several books about animals and the people who owned them. He wrote many autobiographies concerning animals including ‘If Only They Could Talk’ in 1970. Some of his writings were adapted into films and television series.

James Herriot was born James Alfred Wight to James Wight and Hannah Bell Wight in Sunderland, County Durham, England. He was born on October 3, 1916, and grew up in Glasgow. He went to Yoker Primary School and later attended Hillhead High School. He enrolled at Glasgow Veterinary College and qualified as a veterinary surgeon in 1939 at the age of twenty three.

He undertook his veterinary practice in Sunderland starting January 1940 but later moved to Skeldale House in Thirsk, Yorkshire, where he spent much of his career life. In 1942, he was enlisted serve in the Royal Air Force and was discharged a few years later having qualified as a Leading Aircraftman.

James Herriot had a passion for writing and aspired to pen down his thoughts and the things he could see and relate with. However, his ambition was clouded by his busy schedules as a veterinary. The passion was rekindled later when he was fifty years old in 1966, and he began writing. He started writing on a variety of subjects including football which he was a fan since childhood. His writings, however, never became popular and he decided to change the subject to something more appealing.

In 1969 he wrote the book ‘If Only They Could Talk’ basing the stories therein on his experience as a vet. The book was later published in 1970 in the United Kingdom by Michael Joseph Ltd. However, it recorded the lowest number of sales made until it was rearranged by Thomas McCormack of St. Martin's Press in New York City.

On November 5, 1941, James Herriot married Joan Catherine Anderson Danbury and had two children James Alexander and Rosemary. He lived with his family in the village of Thirlby. In 1991, he was diagnosed with prostate cancer and was admitted for treatment at the Lambert Memorial Hospital in Thirsk. He died of cancer on February 23, 1995, in Thirsk at the age of seventy eight.

On July 14, 1999, his wife died. In 1979, he received an Honorary Doctorate from Heriot-Watt University. Class 180 DMU No. 180112 was named ‘James Herriot’ in his honour by the Grand Central train service operator in the UK. In 2014, a statue was erected at Thirsk Racecourse by actor Christopher Timothy in his honor.