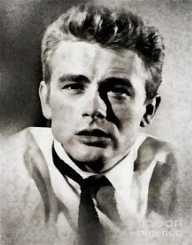 James Dean was born on February 8, 1931. He was an American actor. He is well known for his role in the drama film ‘Rebel Without a Cause.’ He achieved a lot in his life before he died. He died at the age of twenty four just at the peak of his career. He is remembered as a cultural icon of teenage disillusionment and social estrangement. He also appeared in films such as ‘East of Eden’ and ‘Giant.’ He was the first ever actor to have received a posthumous Academy Award nomination for Best Actor. He remains the only actor to have had two posthumous acting nominations.

James Dean was born on February 8, 1931, in Indiana, United States of America. He was born to Winton Dean and Mildred Wilson. His father was a dental technician. Later on, his family moved to California. James attended Brentwood Public School before joining the McKinley Elementary School. He was close to his mother as she was the only person who understood him. When he was nine years old, his mother died from cancer. He was devastated by the death of his mother and took it him a long time to heal and recover from the end.

James Dean joined Fairmount High School where he was a popular student. He participated in the baseball and basketball teams in the school. In 1949, he graduated from high school. He joined Santa Monica College after high school where he majored in pre-law. He later realized that his passion was in acting and not becoming a lawyer. He thus transferred to UCLA where he took up drama. His father was not happy about his decision, and so they fell out. While at UCLA he was among the three hundred and fifty thousand actors who were selected to play Malcolm in ‘Macbeth.’ In 1951, he dropped out of school to pursue a career in acting.

James Dean's debut on television was in a Pepsi television commercial. He, later on, got a role in the comedy ‘Sailors Beware.’ He acted in the comedy alongside Jerry Lewis and Dean Martin. He did not make it in the acting industry immediately, so he had to take up part-time jobs to sustain himself. He moved to New York City where he enrolled at the Actors Studio under the guidance of Lee Strasberg. He worked as a stunt tester for the game show ‘Beat the Clock.’ In the 1950s he played minor roles in television programs such as ‘CBS Television Workshop,’ ‘Hallmark Hall of Fame,’ ‘Family Theatre’ and ‘The Bigelow Theatre.’

In 1952, James Dean starred in ‘The Metamorphosis’ which was a production by Franz Kafka. In 1954, he starred in the Broadway production of ‘The Immoralist.’ The production was about a gay man who marries a woman to see if he can overcome his homosexual desires. In the same year, he appeared in the Off-Broadway play ‘The Scarecrow.’ In 1955, he was chosen to play the role of an anger driven teenager in the movie ‘Rebel Without a Cause.’  This movie made him more popular, and it was received well by the public. The movie became popular with teenagers who would relate to James’ role in the movie.

In 1955, James Dean won the Golden Globe Special Achievement Award for Best Dramatic Actor for his portrayal of Cal Trask in ‘East of Eden.’ He also earned a Jussi Award for Best Foreign Actor in the same film.

James Dean's sexuality had not been established while he was still alive. His best friend, William Bast came out years after his death and claimed that they had a sexual relationship. James was also involved with women including actress Beverly Wills, Liz Sheridan, and Barbara Glenn. He also had an affair with Italian actress Pier Angeli. On September 30, 1955, he died in a car accident when his car had a head-on collision with another vehicle. He was declared dead on arrival to the hospital. He died at the age of twenty-four when he was beginning his career in acting.