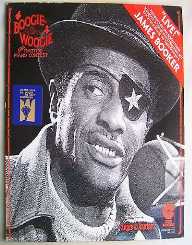 James Booker was one of the most influential musicians during the 1960s and has developed his style of combining blues with gospel, jazz, and classic which influenced succeeding musicians.

Although James Booker only has a selected number of albums recorded in his life, he was an active performer in the New Orleans music scene from the 1960s to 1970s and even performed at music festivals in Europe.

Shortly before he came into the spotlight, he performed for Arthur Rubinstein in 1958 which greatly impressed the former in regards to his skills. His breakthrough success came in 1960 with his single "Gonzo" which was a commercial success. He followed it up by playing with other musical talents such as Aretha Franklin, B.B King, Former The Beatles' drummer Ringo Starr, The Doobie Brothers, and blues master Freddie King to name a few.

Because of his mastery with the piano and unpredictable playing, James Booker was dubbed as the Piano Prince of New Orleans. His fingerwork was described as "spiders on the keys" and was even called Bayou Maharajah and Black Liberace for his complex technique. Booker was responsible for the hit singles The Sunny Side of the Street, A Taste of Honey, and Papa Was A Rascal of which the latter has become a cover favorite among other artists.

A native of New Orleans, Louisiana, he was born as James Carroll Booker III on December 17, 1939. He came from a family of Baptist ministers and was greatly encouraged at a young age to pursue music. At the age of 6, he began taking piano lessons focused on the works of prominent classical pianists such as Johann Sebastian Bach and Frédéric Chopin. In time, his skills significantly improved and he began playing for the New Orleans radio station on live broadcasts on a regular basis.

Aside from being a great pianist, Booker was also a talented saxophonist, but his skill at the piano far overpowered that of his saxophone playing beside the fact that he grew a close affinity towards the piano. He was an alumnus of Xavier University Preparatory School and even contributed to the album of the Fats Domino while still in high school.

Despite his success and musical talents with a lot to look forward to, his career came to an abrupt end when he died at the age of 43. James Booker was a drug user whose addiction to various drugs such as cocaine, heroin, and even alcohol let to his untimely doom. On November 8, 1983, he died from organ failure in New Orleans, Louisiana which was most likely caused by his heavy drug abuse. Upon his death, albums of his live recordings namely Spiders on Keys and Bayou Maharajah were recorded in his hometown of New Orleans.