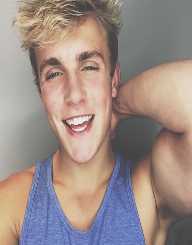 Jake Paul was born on January 17, 1997, in Cleveland, Ohio, United States of America. He was born to Greg Paul and Pam Step nick. He was brought up alongside two siblings, Roman Paul and Logan Paul. His brother Paul is a Vine star and a big social media personality. Jake is an America social media personality and Vine star. He is twenty years old. He attended Westlake High School in Cleveland, Ohio. As a student, he was interested in sports such as football and wrestling.

Before becoming famous, Jake Paul was a competitive wrestler as he was sporty. He loved sports even when he was still in high school. In 2013, he created his Vine account where he started uploading his videos. He became popular very fast because within eight months his videos have already got two million followers. He is among the Vine stars that have reached their success very fast. Since 2013 he has not looked back, and he continues to pursue his career.

As the years passed by to the present day, Jake Paul has worked so hard to increase his popularity on Vine and draw a broad fan base towards what he loves doing best, and that is making videos that entertain people and showcase him to the world. His videos are mainly comical and hilarious, and people like what he has to offer. He makes videos that show him taking risks and at times putting his life in danger. He has hurt himself several times when making his videos because he performs pranks such as jumping in front of moving cars.

His brother Logan is also a Vine star and social media personality who has made it in the industry. Jake Paul appears in some of Logan’s videos, and he then posts on his Vine account. In 2016, he starred in Disney Channel’s sitcom ‘Bizaardvark’ as Dirk. He starred in the sitcom alongside Olivia Rodrigo and Madison Hu. He became popular for the role that he played in the sitcom, and his role in the film showed his acting abilities. He was nicknamed ‘One Take Jake’ for his ability to act demanding roles with ease and with only one take. He has also starred in a variety of independent films.

Jake Paul was raised in caring and loving family. His parents have been very supportive of his career. He is a person who has a charming personality that attracts people to him. He is friendly and social. It is not known whether he is in a relationship with anyone. The White House secret service once questioned him for spending hours in the White House without the knowledge of anyone. He had hid in the White House for hours and then left the premises without anyone seeing him. However he took a video which he then posted on his Vine account, and that is how the secret service caught up with him.  He was questioned and left alone because he was considered not to be a threat.