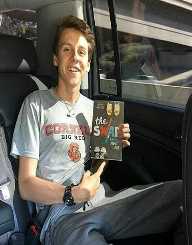 Jacob Bertrand was born on March 6th, 2000. He is an American actor popularly known for several roles in the film industry. For instance, he is famous for his lead role in the Kirby Buckets, a Disney XD series. He has also been featured in another Disney movie called The Swap. He also got highly acclaimed for playing the role of Henry Forman in Marvin Marvin which is a Nickelodeon series. He also a voice actor. He has lent his voice to some animated movies.

Jacob Bertrand was born on March 6th, 2000 in Los Angeles, CA. His parents are Scott Bertrand and Christina Bertrand. He also has two other siblings; a brother called Blake and his loving sister Makenna. Right from the time, Bertrand was young; he knew the career path that he would be taking in future. As a result, when he was around eight years, he made his first debut role in the movie industry. In 2008, Bertrand he landed a minor role in the movie House. This was his first appearance in the movie industry. His role in the movie opened doors for other opportunities to follow in his career. After this appearance, he has gone to feature in some ads, movies, and TV series. Bertrand has also made a guest appearance in popular NBC comedies such as Community and Parks Recreation.

In his voice acting career, Bertrand voiced the role of Gil in the animated TV series Bubble Guppies. He voiced this series when it was in its third season. Bertrand has always tried his best to make himself unique in his career endeavors. Recently in 2016, he featured in the movie The Swap while playing the lead role of Jack Malloy.

Aside from acting both in the film and in the TV industry, Jacob Bertrand has shown his compassionate efforts by participating in charity events. In 2015, he was part of a charity event that was meant to raise funds for cancer patients. In 2016, he was also part of another fundraising event called A Time for Heroes. This event’s goal was to create awareness on HIV. It also took time to encourage those living with HIV already.