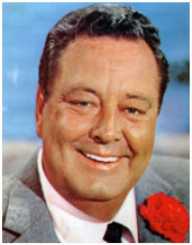 For more than half a century, Ralph Kramden of “The Honeymooners” has ruled the hearts of Americans. And so has the man who portrayed him on screen, Jackie Gleason. Known for his bold and verbal comedy style, Gleason made ‘How sweet it is’ a household phrase in America. He also hosted the highly popular ‘The Jackie Gleason Show’ for almost 18 years.

The famous character “Fred Flintstone” from the Flintstones is based on his “Ralph Kramden” persona.

Born in 1916 as Herbert Walter Gleason Jr., Gleason was later baptized as John Herbert Gleason. His father Herbert was an auditor. Gleason had a brother, who died at the age of 14. He did not grow up in a happy household, as his parents fought often. And one day in 1925, his father abandoned the family. Gleason was then raised by his mother Mae who passed away in 1935. Just 19 years old, Gleason had no family, no money and a lot of struggles to look forward to.

Jackie Gleason had a talent for rough, verbal comedy. He started doing skits and stand-up gigs at an early age. In fact, after his mom passed away, the first paying job he got was a weeklong comedy gig for $19. From zero to “The Abdominal Showman” Gleason had a fantastic career as a Broadway performer. Throughout his career, he earned several nicknames such as “Mr. Saturday Night,” “The Jumpin’ Jack,” “The Abdominal Showman” and “The Great One.”

Though Jackie Gleason signed a contract with Warner Brothers for his brilliant comedy performances, his early movie stints didn’t pay off. Gleason was cast in minor roles in movies like the Navy Blue, and All through the night in 1942. The Hollywood experience became even bitter when his contract wasn’t renewed. He left Hollywood, and started performing live on stages, worked at Cabarets, and gained minor recognition on the Broadway.

The turning point in his career came in 1950 when Jackie Gleason was hired to host Dumont’s “Cavalcade of Stars.” Soon he became the permanent host of the show. Gleason brought a new flair to stand-up comedy with his loudmouth verbal deliveries, animated facial expressions, constant gesturing at the camera and sketch characters that people began to love.

Between 1952 and 1970, Jackie Gleason starred as various characters on popular television shows. This series came to be known as “The Jackie Gleason Show.” His most notable roles included Ralph Kramden, the bus driver, Joe the Bartender, Reginald Van Gleason III, Rudy the Repairman and the Poor Soul.

Ralph Kramden became so popular, that a spinoff titled “The Honeymooners” was produced, and it quickly became the number 2 show in the United States. The character also inspired the creation of “Fred Flintstone.”

His trademark lines “How Sweet It is!” and “Aaand Away We Go!” became household phrases.

Jackie Gleason did not limit himself to comedy. He appeared alongside Paul Newman in “The Hustler” (1961). His role as Minnesota Fats earned him an Academy Award nomination. He followed this with several movies like Requiem for a Heavyweight, Don’t drink the water, How do I love thee?, Smokey and the Bandits series and more. Gleason had a parallel music career alongside comedy. His first ten albums sold over a million copies. Known for his melodious “mood-music,” Gleason did not know how to read musical notes.

His album “Music For Lovers Only” spent a record 153 weeks in the Billboards Top Ten Charts selling over half a million copies.

Jackie Gleason won 6 awards and 13 nominations in his fantastic career. The awards include a Golden Laurel & an NBR award for his role as a supporting actor on the Hustler. He was included in the OFTA Hall of Fame in 2004. He won a Tony Award in 1960 for “Best Performance by a Leading Actor in a Musical.” He played the role of Sid Davis in “Take Me Along.”

Throughout the fifties and sixties, he received several Primetime Emmy nominations, 3 Golden Globe and one Academy Award nominations. He did not win any of these. In 1987, after his death, the Miami Beach Auditorium was renamed as the Jackie Gleason Theatre of the Performing Arts.

By 1986, Jackie Gleason was terminally ill with colon cancer. He was also diagnosed with diabetes and phlebitis. Despite treatment, his condition did not improve, and cancer spread to his liver. He breathed his last on June 24, 1987, at his home in Florida.

Jackie Gleason married three times in his life. His first marriage was to Genevieve Halford, a dancer, in 1936. With Gleason not able to settle into family life, the marriage was bittersweet. The couple separated twice with legal separation coming 20 years later. They had two daughters – Geraldine and Linda, an actress. His grandson Jason Patric is a well-known actor.

In 1974, Gleason once again met dancer Marilyn Taylor, the love of his life, and a year later, they were married. Following an emergency landing, Gleason developed a fear of flying that remained with him till his last breath. He exclusively traveled by train after that incident. “The Great One” had an almost insatiable thirst for books on the paranormal as well as the UFO.