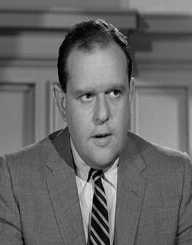 Actor Jack Weston was born in Cleveland, Ohio on the 21 August 1924. During his childhood, he showed an interest in acting and was a member of the Cleveland Playhouse.

After graduating from high school, Weston was drafted into the US military.

Once he had completed his military service, Jack Weston relocated to New York where he made his  Broadway debut in Seasons in the Sun (1950).

After moving to Los Angeles in 1957Jack Weston appeared in an episode of Gunsmoke which led to other roles in television including The Untouchables (1959) and The Twilight Zone (1959).

In 1975 Jack Weston moved to New York where he again began appearing on stage. Plays he appeared in included The Ritz and The Floating Light Bulb.

After starring in Alan Alda’s play, The Four Seasons, Jack Weston later appeared in a spin-off television series of the same name (1984). His final stage appearance was in The Tenth Man (1989).

His role in The Floating Light Bulb led to a Tony Award for Best Actor (1981) nomination.

He was married twice. His first wife was Marge Redmond, and after their divorce, he married Laurie Gilkes.