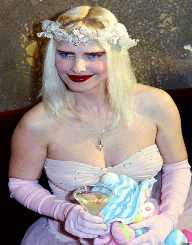 Ilona Staller was born on November 26, 1951 in Budapest, Hungary. When she was young, her father left the family and Ilona was raised by her mother and her stepfather. Her mother was a midwife, but her stepfather, an official in Hungarian Ministry of the Interior.

In 1964, Staller began working as a model at M.T.I.-a Hungarian news agency. She later claimed that while she was serving at a hotel in Budapest, she provided Hungarian authorities with information about American diplomats. When she was 25 years old, she met Salvatore Martini, who she later married.

After her term in the parliament ended, Staller became the founder of the political movement Partitodell’Amore (Party of Love). In 2002, she began campaigning to represent Budapest’s industrial district Kobanya in the Hungarian parliament. She failed to collect enough signatures to be a non-partisan candidate. In 2002, she again made the same offer to have sex with Saddam Hussein, and in 2006, made the same offer to Osama bin Laden.

In 2011, it was found that Staller is eligible to receive a yearly pension of 39,000 euros from Italian state for her five years in the parliament. The announcement draws a lot of controversial media attention, but Staller announced that she earned it and is proud of it. In 2012, Staller created the Democracy, Nature and Love Party. The party’s objectives included legalization of same-sex marriage, reopening of brothels and wage guarantees for young people.