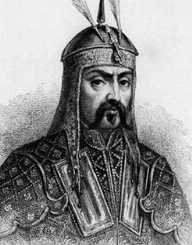 Attila was a warrior king of the Hun people who reigned in the fifth century. History remembers him as the most savage invader of the Roman Empire.

Attila was supposedly born in 406 AD in present-day Hungary. He was the son of a powerful royal aristocrat of the Hun Empire. The Hun people were nomadic Eurasian people who settled in Central And Eastern Europe in the second century. As a prince of the empire, Attila was educated in politics, military and diplomatic relations. At the time the Hun people were being ruled by two of Attila’s uncles. This was twin rulership system was unique to the Hun people.

In 434 the two uncles passed away and Attila and his younger brother Bleda continued with the twin leadership style. Unlike Bleda, Attila was a man of war from the onset of his leadership. He forged diplomatic ties with the Roman military commander Aetius. Aetius headed the army of the Western Roman Empire which had its capital in Rome. The Eastern Roman Empire had its capital in Constantinople, which is today's Istanbul.

In 445 Attila killed his brother and declared himself the sole king of the Hun Empire. He consolidated the various chiefdoms of the Hun into a unitary kingdom.

When Attila and his brother Bleda assumed power in 434, the Hun Empire was on the verge of war with the Eastern Romans. Dissident Hun princes had taken exile in the Roman Empire. The princes were accused of aiding the Romans in plundering the Hun’s royal treasures including the royal burial sites. The Roman Emperor decided to agree with the peace terms of the Huns. The Romans were to pay a tax of seven hundred pounds of pure gold annually. The peace agreement was later called The Treaty of Magnus. The treaty did not hold for long.

In 441, Attila and his brother invaded the Eastern Roman territory in the Balkans. The two brothers were merely avenging the betrayal of the treaty by their Roman counterparts. The plundered treasures had not been returned and the dissidents were still freely living in the Roman territory. In 443, the Hun army was at the doorstep of the Roman capital Constantinople. The two parties renegotiated the Magnus treaty. This time the imposed tax was punitive. The seven hundred pounds was tripled to two thousand one hundred pounds of pure gold. To express their anger, the Huns imposed a late payment penalty of six thousand pounds of gold for the delays in the previous treaty. The Roman emperor obliged.

The Rise Of Attila

Having rampaged in the east, Attila decided to invade the Western Roman Empire. In 450, he waged war with the Western Romans in the guise of wanting to free the Roman princess Honoria from a forced marriage. Like always, Attila gave out his terms for peace. The demands were rejected by Roman Emperor Valentinian III. Attila set his eyes on Gaul, present-day France. On the battlefield, he came face to face with his erstwhile ally general Aetius.

In the fighting later called the Battle of Catalunian Plains, the Roman coalition army stood its ground. For the first time in his life, Attila had met formidable resistance. By the end of the war, heavy casualties were witnessed by both armies. The Visigoth king who fought alongside the Roman army was dead. Half of the Roman army had been killed. On the other side, the Hunnic army had been defeated. Attila retreated to his Central European Hunnic Empire.

In a show of defiance, Attila made another incursion into the Western Roman territory. This time, Attila went for the capital Rome. When Milan and Aquileia fell into Attila’s hands, the Roman Pope Leo I intervened. Attila pulled out his forces after the meeting

Attila died in 453 at the age of forty-seven. His zealous onslaught on the Romans gave rise of his nickname The Scourge of God. Attila was the only European king who stood up against the Roman Empire with impunity.