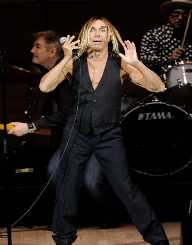 Iggy Pop was born on April 21st, in 1947. Iggy is considered as the “Godfather of Punk.” Apart from being a talented singer, he is also a producer, actor, and a songwriter. Iggy is also hailed for his unique and crazy stints on stage. Additionally, he also earned high acclaim for being the lead vocalist for the Stooges. His pop song titled "Real Wild Child" was a commercial success that made Iggy a nationwide pop celebrity singer.

Iggy Pop was born on April 21st in 1947. His place of birth was in Muskegon, in Michigan. He was the son of James Newell and LouellaOsterberg. His father worked as an English teacher. He was also admired for his baseball coaching skills at the Fordson High School located in Dearborn, Michigan.

Iggy’s music career took off right from the time he was still studying in high school. He used to play drums for the different school bands. One of such bands was called the Iguanas. Iggy coined his stage name “Iggy” from the Iguanas band that he initially played for. At some point, he joined hands with brothers Michael Erlewine and Dan. The trio played for the Prime Movers. However, Iggy left the university and migrated to Chicago with the main intentions of learning more about blues music.

Accordingly, while in Chicago, Iggy got some opportunities to play drums for different blues bands. Some of the bands that inspired him at the time were the likes of The Doors, MC5, and The Sonics. These bands mainly played Chicago blues type of music was laid profound inspiration to Iggy.

Shortly after, Iggy came up with a band called Psychedelic Stooges. Since then henceforth, he gave himself the stage name ‘Iggy.’ Early band members included Ron Asheton who played the guitar, Ron’s brother Scott who drummed and Dave Alexander who took on bass. Iggy was the lead vocalist for his new band.

Success With The Stooges

Iggy’s band, The Stooges, later brought success to his side. His band then became a huge influence in the world of punk music. This occurred during the late 70s to the 80s. His stage antics identified him as crazy and unique in his way. At times Iggy would come on stage while he is covered in blood. During his live performances, rumor has it that Iggy often cuts himself without fear. Jumping to his audiences is also a common behavior during his performances.
As a band, Iggy and his band members released with a debut album in 1969. The following year they released Fun House. At the time, punk had not gained popularity, and therefore they band failed to earn major recognition. This influenced the decision of the record label to drop them. Moreover, some of the band members had drug-related issues.

Later on, Iggy Pop again re-united his band and called it Iggy & the Stooges. This was done with the help of David Bowie. They released a couple of albums including Raw Power – 1973, but they never stood a chance to stick together. Unfortunately, the group fell apart for the second time.

Iggy went on to pursue his solo career regardless of the troubles he faced with the band. He was helped by Bowie as his producer to release The Idiot – 1977 and lust for Life – 1977.

His efforts finally paid off in 1986 after the release of one of his solo albums titled Blah BlahBlah. One of the songs on the album that earned him high acclaim was the "Real Wild Child." Another well-performing album Brick followed this by Brick which was released in 1990. “Candy,” one of the songs in this albums remains to be among his greatest works to date.

Iggy Pop tied the knot to Wendy Weissberg in 1968. The relationship lasted for a few months before going separate ways. He wedded Suchi Asano in 1985. This relationship came to an end in 1999. His third marriage was to Nina Alu. The two had one son called Eric.