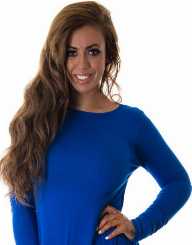 Holly Victoria Hagan was born in July 7, 1992. She is an English and social media personality. Her public profile is being managed by Misfits Celebrity Management. She is also a pop singer, stage performer and dancer.

Holly Victoria Hagan was born on July 7, 1992, in England. She lived with her parents and sister at the Council House at Grove Hill in Middleborough. She attended a public school until violence rocked her family. Her family later moved to Thornaby-on-Tees. He finished her education from St. Joseph’s RC Primary School. She later pursued a career in sales and marketing.

Holly began her career in sales at HM Revenue and Customs. She turned to Santander Call Centre. She officially began her career as a model. She became a model for men’s magazines. She did her first topless pose for ‘Nuts’ alongside Vicky Pattison. She also posed for ‘Loaded’ and ‘FHM.’ In 2011, she appeared in all seasons of the show ‘Geordie Shore.’ In 2012, she lost nineteen kilograms and appeared nude for the magazines ‘OK’ and ‘Heat.’ She is also a singer. She has released the vocals ‘VIP, Who Cares’ and ‘Milkshake’ among others.  In the same year, she became a brand endorser for ‘Protein World.’ In 2014, she became more famous when she published her autobiography ‘Holly Hagan: Not quite a Geordie.’ In 2016, she appeared in the film ‘Car Crash Couples’ alongside Kyle.

In 2011, Holly was in a relationship with reality television star Gaz Beadle. They later broke up, and she dated Frankie Cocozza who is a British singer. In 2014, he settled with Kyle Christie. Holly is currently twenty-five years old.