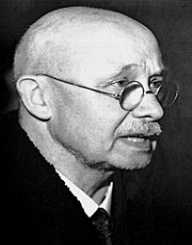 Hermann Staudinger was born on March 23rd, 1881. He was a famous German organic chemist who was bestowed with a Nobel Prize for demonstrating the existence of macromolecules. He was awarded the chemistry Nobel in 1953. Other discoveries that he made were of the Staudinger reaction and ketenes.

Immediately after earning his Ph.D., he was employed at the University of Strasbourg. Here, he was under the guidance of Professor Johannes Thiele. Thiele was a celebrated German Chemist at the time. It was while working at the university that he discovered ketenes.

In 1912, Hermann Staudinger got a new job at the Swiss Federal Institute of Technology situated in Zurich, Switzerland. A few years later in 1919, he made the discovery that would later be identified as the Staudinger reaction.

In 1927, Hermann Staudinger tied the knot with Magda Woit from Latvia.

Hermann Staudinger passed away on September 8th, in 1965. He was 84 years old at the time of his death.