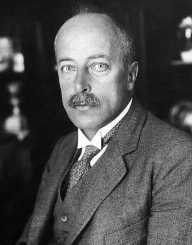 Max von Laue also was known as Max b was a German Physicist born on October 9th, 1879. He won the 1914 prestigious Nobel Prize for physics. This was for his contributions towards the X-rays’ diffraction by use of crystals. He also won many other awards throughout his career. Max was a great advocate against National Socialism. In fact, after the Second World War, he re-organized the German science. In his later years, he suffered from depression every once in a while. Fortunately, he recovered from it shortly after.

Max von Laue was born on October 9th, 1879. His place of birth was in Pfaffendorf situated near Koblenz, Germany. He was the son of Julius von Laue and Minna Zerrener. His father was among the officials of the military administration of Germany.

Max von Laue resumed his schooling in 1899 at the University of Strassburg. This was after taking part in the military services from 1898. At the university, he studied physics, chemistry, and mathematics. He also studied in the University of Gottingen. During his studies at the university, he was greatly influenced by Max Abraham and Woldemar Voigt. Both were Physicists. His other great influence was David Hilbert who was a mathematician.

Among the other universities, Max von Laue attended was the Ludwig Maximilian University of Munich or LMU. In 1902, he enrolled in the Friedrich-Wilhelms-University of Berlin. Max Planck mentored him during this time. He attained his doctorate in 1903.

Max von Laue began his career in 1902 at the University of Berlin. He served as an assistant to Professor Max Planck. Meanwhile, he conducted his researchers based on interference. Later in 1903, he shifted to University of Gottingen. He worked there for two years under Professor Voight and Professor Abraham.

He was later offered a job at the Institute of Theoretical Physics’ situated in Berlin. He began working there from 1906 under Professor Max Planck. In 1909 he joined the University of Munich as a Privatdozent teacher of thermodynamics. He also taught the relativity theory and optics.

In 1919, Max von Laue became the director of the Institute for Theoretical Physics, which was part of the University of Berlin. He served in the position for many years till 1943. During this time, he also served as a consultant at Physikalisch-Technische Reichsanstalt.

Between 1944 and 1945, he authored his book History of Physics at Wurttemberg. In 1946, he rejoined the Max Planck Institute situated in Gottingen. He was initially the acting director and was later appointed as Titular Professor. The International Union of Crystallographers made him their honorary president in 1948. In 1958, Max took his retirement from active service.

In 1914, Max von Laue won the prestigious Nobel Prize for physics. Throughout his career, Max earned himself other awards as well for his great contributions as a physicist. These awards include the Ladenburg Medal, the Max-Planck Medal, and the Bimla-Churn-Law Gold Medal among others. During this time, he also received honorary doctorates from different universities globally.

In 1910, Max von Laue wedded Magdalene Degen. The couple was blessed with two children. During his free time, Max would spend his time mountaineering, sailing, skiing and motoring. His favorite music was classical music

Max von Laue took his last breath on April 24th, 1960 following a car accident. He was 80 years old at the time of his death.