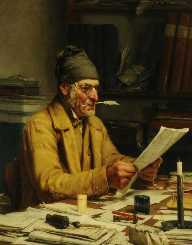 Albert Anker was born on 1 April 1831 in Switzerland. He became one of the most renowned painters in the Swiss republic. His paintings majorly showcased the reality of life in his country especially the countryside lifestyle. He is one painter who many people have lived to remember and adore in the Swiss realm. He died in Ins on 16th July 1910 at the age of 79.

Albert Anker was the son of Samuel Anker and Marianne Elisabeth Gatschet. He was born on 1st April 1831 in a family of three children with him being the second born son. His desire to paint was aroused at a tender age of 11 when he went to an exhibition, and the artwork left him in awe. When he had just turned 16 years of age, the cruel hands of death snatched him his mother and brother. He went to school in Neuchatel in 1845 through to 1848 where he learnt art under Louis Wallinger.

Albert Anker later joined high school in 1849 at Gymnasium Kirkchenfield from where he graduated in 1851. Another tragedy befell him when he lost his sister and only sibling in 1852. He enrolled for a theology course in Bern which he later furthered at the University of Halle, Germany. It is in Germany that his passion for art was rekindled when he had a chance to view some of the most magnificent pieces of art. His father took him to study art in 1854, and Albert Anker relocated to Paris the following year to major in arts. He joined the Ecole Nationale Superieure des Beaux-arts for five years working at the studio of Charles Gleyre.

Albert Anker majored in painting portraits, and his zeal was unquenchable since he wanted to prove his worth in the art world. He also lost his father in 1860 before his graduation.

Some of Albert Anker’s works which were based on the themes ‘historical’ and ‘biblical’ include; paintings of Luther and Calvin. He also endeared in painting the rural life which was also one of his other themes. In his paintings, he could capture both men and women, young and old without discriminating their social or economic placement. Apart from major paintings, he also has a record of more than 30 still-lives in his name and a good number of drawings and watercolors which many people have drawn their inspiration from.

When he graduated in 1861, Albert Anker went to Northern Italy where he was able to learn other valuable skills drawn from Titan and Corregio. Some of his paintings which include ‘Schlafendes Madchen im Walde’ were amongst his first to be awarded in 1966. In 1976, he was named as the ‘Knight of the Legion d’honneur.’

Albert Anker also became a prolific painter capturing the rural sections of his country when he moved to Anet after his retirement in 1891. He was also one of the members of the Swiss Art Commission for five years before he took a break and joined again in 1895-1898. He served in many other organizations as well including the ‘Gottfried Keller Foundation.’ He also received an Honorary Doctorate from the University of Bern (1900).

In 1864, Albert Anker married Anna Rufli with whom he had six children. He was disabled on his right side when he suffered a stroke in September 1901 a condition which he lived with until his demise on July 16, 1910. He passed away at the age of 79 in Ins, Switzerland.