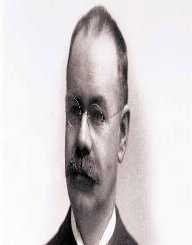 Herman Hollerith was an American statistician who was also an inventor. His machine has made him better known as the Father of Modern Automatic Computation.

Herman Hollerith was born on February 29, 1860, in Buffalo, New York. His parents were immigrants from Germany. His father, George, was a professor.

Herman Hollerith studied mining engineering. He started at City College of New York in 1875. From then on he attended Columbia University in the School of Mines. He took an interest in how things worked and would visit machine and metallurgical shops in the area. Hollerith graduated with the degree “Engineer of Mines” in 1879.  He later obtained a doctorate from Columbia.

Herman Hollerith first worked at the U.S. Census Bureau. The director of the division of vital statistics, John S. Billings, suggested the need for mechanically counting the raw data.

Herman Hollerith connected this with the mechanism used for automatic weaving devices. A method of punched cards would store the data, and the process would take much less time to tabulate.

Herman Hollerith took on other jobs while considering this type of machine. He taught mechanical engineering at MIT in 1882. Later he worked for the railroads in St. Louis, Missouri designed an electrically activated brake system. His final job was for the U.S. Patent Office in Washington, D.C. He worked there from 1884 to 1890. By the time that the 1890 census came around, Herman Hollerith invented the machine that would record information and code data numerically. He made them for the U.S. Census Bureau.

Because of the tabulating machines, the bureau noticed a significant difference in the time it took to tabulate and complete data sets. His machines were also used for the census reports in Canada, Norway, and Austria. Even the railroad companies learned how to use the device to calculate fare information.

After Herman Hollerith left the U.S. Patent Office, he founded the Tabulation Machine Company in 1896. This international company leased and sold tabulation machines to census bureaus and insurance companies.

Hollerith's company continued to grow as it adapted its machines to do more jobs. For example, in 1906, Hollerith added a plugboard control panel so that new machines would not have to be rebuilt to do new tasks.

Business continued to grow, and so did the company. In 1911, Herman Hollerith merged Tabulation Machine Company with three other companies to create Computing Tabulating Recording Company. In 1924, the company was named International Business Machines Corporation, better known as IBM today.

When Herman Hollerith retired as consulting engineer in 1921, he lived on his cattle farm in Maryland.

Herman Hollerith married Lucia Beverly Talcott in 1890. The couple had six children.  Hollerith died on November 17, 1929, at the age of 69.

Elliot Cresson Medal from the Franklin Institute of Philadelphia for Outstanding Invention of the Year, 1890

An inductee into the National Inventors Hall of Fame, 1990

Inventor of the tabulation machine
Known as the Father of Modern Automatic Computation
Founder of the Tabulation Machine Company, later to become IBM