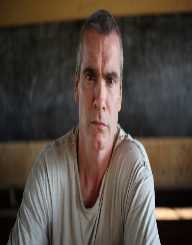 Henry Rollins was born on February 13, 1961. He is an American musician, comedian, actor, writer and television and radio host. He is mostly known as a musician. He was in the legendary punk band ‘Black Flag.’ He is also a spoken word artist, and this has garnered him more fame. From 2006 to 2007 he had his television show titled ‘The Henry Rollins Show.’ Rollins is a multi-faceted artist as he cannot be categorized in one field only.

Henry ‘Rollins’ Lawrence Garfield was born on February 13, 1961, in Washington DC. He was born to Paul and Iris Garfield. When he was three years old, his parents divorced, and he was raised by his mother as a single parent. Rollins was abused when he was young by his mother’s boyfriend. This led him to have self-esteem issues and depression.

Rollins attended The Bullis School in Potomac, Maryland. Being a student at Bullis helped him a lot in regaining confidence and developing a good sense of discipline. Henry began writing while he was a student at Bullis. In 1979, he enrolled at the American University in Washington DC but later on dropped out.

It was not easy for Henry Rollins when he dropped out of school. He had to take up several less paying jobs to sustain himself. During this period he worked as a roadie for different bands, and that is when he came up with the name Henry Rollins. In 1981, he joined the group ‘Black Flag’ where he was a vocalist. He played a lot of concerts with the band building a fan base as time went by.

In 1986, the band disbanded and Henry went out to pursue a solo career. In 1987, he collaborated with Chris Haskett who was a guitarist and released the record ‘Hot Animal Machine.’ In the same year, he released ‘Big Ugly Mouth.’ In 1987, he formed the ‘Rollins Band.’  In that year they released their debut album ‘Life Time.’ They also released their first EP ‘Do It.’ During the 1990s, Henry joined the acting scene. He appeared in films such as ‘Heat,’ ‘Lost Highway’ and ‘The Chase.’

In 2004, Henry Rollins started hosting ‘Harmony in My Head’ which was a weekly radio show. He did not stop his music career as in the show he would also play music. His music included genres like hard rock, heavy metal, jazz and classical music among other genres. He also became a television host in 2006. In that year he hosted ‘The Rollins Show’ which he started.

‘The Rollins Show’ was all about interviewing celebrities and music. The show ended in 2007 after going for two seasons.  Henry is a multifaceted artist; he is not only a musician and actor but an author as well. He has written several books including ‘See a Grown Man Cry,’ ‘Black Coffee Blues’ and ‘Now Watch Him Die.’

In 2013, Rollins appeared at the Claremont Folk with his spoken word performances. He continues to act from time to time. He has also made voice notes in animations such as ‘Legend of Korra.’ He continues to perform spoken words all over America.

Henry Rollins is not married and prefers to remain alone than committed to anyone. He is also not dating and does not have a girlfriend. He is committed to his work and making his ambitions come true. He spends most of his time writing and performing his spoken words. He is a Human Rights Activist who supports gay marriages. He does not see what is wrong with being gay.