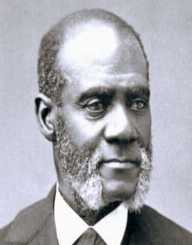 Henry Highland Garnet was an African American church minister and slave trade abolitionist. He became famous for calling on slaves to an armed rebellion on their masters.

Henry Highland Garnet was born into slavery in New Market, Kent County, Maryland on December 23, 1815. His family escaped to New York in 1824. Growing up in New York, Garnet enrolled at the African Free School. He graduated and became a sailor. In 1829, Garnet returned from one of his voyages. He arrived and found his sister had been captured by slave traders. The incident became the bedrock of his violent anti-slavery ideology.

He continued with his education joining the Phoenix High School for Colored Youth. He got admission at the Oneida Institute in New York to study Theology. He graduated in 1940 and became a Presbyterian Church Minister. Two years later, he was commissioned to head the Liberty Street Negro Church in New York.

He was an active sports enthusiast. He once injured his leg on the knee during his sporting activities. In the hospital, the doctors amputated the lower part of the leg to save his life in 1941.

He became a founding member of the American Anti-Slavery Society. Garnet became a vocal advocate against slavery. He partnered with other African American anti-slavery crusaders like Frederick Douglass and William Garrison. A gifted orator, Garnet delivered fiery speeches that made him famous within the abolitionists.

In 1843, he delivered his famous Call to Rebellion speech to the National Negro convention in New York. He argued for the change of approach in the fight against slavery. Garnet called for the Africans to desist on imploring the white society to end the slavery menace. Instead, Africans both free and slaves should wage an armed campaign against slavery. His fellow abolitionists rejected the idea fearing a reprisal form the slave owners.

Garnet took his abolitionist campaign to Europe in 1850. He rallied support for his cause in England and Scotland. He pressed for the freedom of slaves to immigrate to other countries of their choice. Garnet gave examples of Sierra Leone and Liberia in Africa. The two countries were largely populated with former slaves from America and Europe.

After completing his journey to Europe, Garnet went to the Caribbean in 1852. He settled for some missionary pastoring in Jamaica. He spent his time ministering to the people while rallying support for his anti-slavery campaign. Garnet suffered ill health from the tropical climate in Jamaica. He returned to the US and settled at the Shiloh Church as the resident pastor. Due to his militant views, the anti-slavery crusaders shunned him.

In 1861, the American Civil War started. Garnet joined other African Americans in enlisting for the Union army. He survived the July 1863 military draft riots. The white community rioted and razed down black-owned houses and businesses to protest the drafting of blacks into the army. Garnet served in the rehabilitation committee for the victims of the riots. The military halted the drafting. After deliberations, African Americans were allowed in the army. Special black units were created to diffuse the tensions. Garnet helped in the enlisting of blacks in the army.

In 1864, he took his family to the US capital for their safety and the black units in the war. He pastored at the Liberty Street Presbyterian Church. Garnet regularly ministered to the black units for the two years in the capital. He was invited to address the US parliament on February 12, 1865, by the US President Abraham Lincoln. He ministered to them with sermons that called for the abolition of slavery.

In 1868, Garnet became the head of the Avery College in Pennsylvania. He returned to New York and continued his ministering vocation at the Shiloh church. He received dignitaries from across the world working for the abolition of slavery.

Garnet became politically conscious and started supporting the revolutionary movements in the Caribbean. In 1878, he became an international icon. He hosted the Afro-Cuban independence hero Antonio Maceo in New York.

In 1881, his lifelong dream of living in Africa came true. The US President James Garfield appointed him the US ambassador to the West African country of Liberia. Liberia was an African nation settled majorly by freed slaves from the US. He served as the US envoy for only a few months.

Garnet married Julia Williams in 1841. The couple got three children, with two dying in their childhood. He remarried in 1879 after Julia died. Garnet married Sarah Tompkins. The two never had a biological child.

Henry Highland Garnet died on February 13, 1882, at the age of 66. He was buried as a Liberian statesman in Monrovia, after a state funeral by the Liberian military.

In remembering his role in America, several learning institutions renamed after him. There is the Henry Highland Garnet School for Success in New York, HHG Elementary School in Maryland, and Garnet High School in West Virginia.

Garnet never saw his armed liberation call materialize. He, however, inspired other fiery African American civil rights champions like Malcolm X over a century after his death.