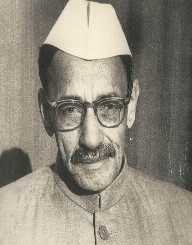 Gulzarilal Nanda was born on July 4, 1898. He was an Indian politician. He was the Prime Minister of India two times. He was also an economist by background.

Gulzarilal Nanda was born on July 4, 1898, in Punjabi, Hindu family. He attended Lahore, Amritsar, Agra an Allahabad for his education.

In 1920, he began his career as a research scholar at Allahabad University. He was a follower of Gandhi, and so he participated in the freedom struggle movement. In 1921, he became a professor of Economics at the National College, Bombay. In the same year, Gulzarilal joined the Non-Cooperation Movement which was against the British. In 1922, he was appointed the secretary of the Ahmadabad Textile Labour Association. In 1932, he was imprisoned for his participation in Satyagraha. Ten years later he was also imprisoned and released in 1944. In 1937, he was appointed the Parliamentary Secretary for Labour and Excise to the Government of Bombay in the Legislative Assembly. In 1946, he became the Labour Minister of the Bombay Government, a post he held up to 1950. He was a member of the National Planning Committee.

In 1947, he represented the country at the International Labour Conference, Geneva in Switzerland. In 1950, he became the Vice Chairman of the Planning Commission of India. In 1951, Gulzarilal became the Planning Minister. He was also in charge of the Irrigation and Power portfolio. In 1952, he was elected a Lok Sabha member from Bombay. In the same year, he was appointed the Minister for Planning, Irrigation, and Power. In 1955, he headed the Indian Delegation to the Plan Consultative Committee, Singapore. Two years later he was elected to the Lok Sabha. The same year also saw him become the Union Minister for Labour, Employment, and Planning. In 1959, he represented his country at the International Labour Conference, Geneva. In 1962, he was re-elected to the Lok Sabha.

Gulzarilal was honored with the Proud Past Alumni from the Allahabad University Alumni Association. In 1997, he received the Bharat Ratna.

He married Lakshmi with whom he had three children. He died on January 15, 1998, in Ahmadabad in Gujarat.