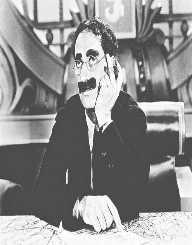 Julius Henry Marx known on stage as Groucho Marx was an American actor, comedian, and writer. Born on October 2, 1890, he is regarded as one of America’s greatest and most talented comedians. Groucho Marx started his career as a member of the Marx Brothers (made up of his siblings) and became known for his quick wit. Groucho Marx was identified by his trademark highly greased mustache and eyebrows.

After spending years with the Marx Brothers making films and in other ventures, he left to pursue a solo career. He was the host of the radio and television game show,“You bet Your Life.” The show was a huge hit running from 1947 to 1961.

Groucho Marx was born on October 2, 1890, in Manhattan borough of New York City. He was the third of five sons of Simon ‘Marrix’ Marx a tailor and ‘MinnieSchoenberg’ Marx. His brothers wereGummo, Zeppo, Chico, and Harpo. The brothers were raised at East 93rd Street off Lexington Avenue in a neighborhood currently known as Carnegie Hill. Minnie had a strong passion to make her children entertainers even though she had no such career. She worked on her children by identifying their talents and urged them on. Growing up, Julius aspired to become a doctor, but the financial status of the family could not meet such expenditure. He dropped out of school at the age of twelve, nonetheless was fond of reading, and that was how he became much educated.

After dropping out of school, Groucho Marx started taking up some entry-level jobs before joining the Gene Leroy Trio as a boy singer. He described his debut with the group at the Ramona Theatre in Grand Rapids as "hopelessly average." With Minnie’s ambition to put her children on stage, in 1909, she managed to group the young Marx’ into a vaudeville singing group billed as "The Four Nightingales" comprising Julius, Milton (as Gummo Marx) and Arthur (known as Arthur and later Harpo Marx). They were joined by a boy singer Lou Levy. They toured the U.S. as vaudevilles but with little success.

Breakthrough For The Marx Brothers

The Marx Brothers found little or no success in their performance as singers, but their success was yet to come in another field. After a usual failed performance as vaudeville in Nacogdoches, Texas, in 1914, Groucho Marx starting cracking jokes on stage and that was the magic. The audience rather found the jokes rather much pleasing, hence, the switch in comedy. They started performing a modified comedy sketch of Gus Edward ‘School Days’ into ‘Fun In Hi Skule.’ He played the character of an ethnic German. However, he will later drop the accent after an anti-German sentiment in 1915. The Marx Brothers became very popular with Julius developing a trademark of a fast-talking guy and came up with the name Groucho Marx.

The popularity of the Marx Brothers earned them a career in Broadway. Groucho Marx  made 26 movies out of which 13 were with his brothers Chico and Harpo. In 1921, they made their movie debut in a silent film, which was never released. Playing other roles in Broadway, they later turned two of their Broadway hits Animal Crackers and The Coconut into movies. Other films include Horse Feathers, Monkey Business, A Night at the Opera, and Duck Soup. During the shooting of, A Night at the Opera, the director Sam Wood was furious with the antics of the Marx Brothers remarking, "You can't make an actor out of clay."

Groucho Marx  responded equally saying “Nor a director out of Wood." During this period, Groucho Marx  almost has a mental breakdown due to his hectic schedules and loses made through the stock market crash in 1929.

Groucho Marx became known for his trademark mustache, eyebrows and walk. In fact, it became highly impossible to identify him without them. The mustache and eyebrows were made from thick greasepaint and came by, as he was fed-up of having to remove the pasted-on mustache after every performance. He became known for it and would use it almost throughout his career, except the latter years of his career.

Despite dropping out of school at the age of 12, Groucho Marx was an avid reader and educated himself through it. He authored several books including his memoir Groucho and Me, 1959 and Memoirs of a Mangy Lover in 1963. He made friends with writers like Carl Sandburg, Booth Tarkington, and T.S. Eliot. He also wrote books like Beds, 1942, Many Happy Returns, The Groucho Letters in 1967 and The Groucho Phile.

Groucho Marx started the radio program. You Bet Your Life on ABC radio in October 1947 through 1949. The show was moved to CBS and aired from 1949 to 1950 and then to NBC from 1950 to 1961. The show ran on solely radio from 1947 to 1950 and on both radio and TV from 1950 to 1960. The last year of airing which was from 1960 to 1961 was on television only. You Bet Your Life was a huge success becoming one of the most popular shows on TV. George Fenneman acted as the announcer and straight man while Groucho Marx took over the entertaining side of the show. The show was canceled in 1961.

After the successful run of You Bet Your Life, he came up with the TV show, Tell It To Groucho, which premiered on January 11, 1962. The show lasted for just five months. He acted as an occasional guest host on The Tonight Show. Groucho Marx appeared on several other shows, and films before calling it a quit. He was given an honorary Academy Award in 1974.

Groucho Marx married three times with all ending in divorce. His first marriage was to a chorus girl, Ruth Johnson who was ten years his junior. They had two children, Arthur Marx and Mariam Marx. After their divorce, Groucho who was 54 years married Kay Marvis who was 21 years. They had a daughter, Melinda Marx. His last marriage was to actress Eden Hartford. During the latter part of life, Groucho struggled with several health problems. He died of pneumonia on August 19, 1977. He was cremated with his ashes interred in the Eden Memorial Park Cemetery in Los Angeles.

Started taking up some entry-level jobs before joining the Gene Leroy Trio as a boy singer. He described his debut with the group at the Ramona Theatre in Grand Rapids as "hopelessly average." With Minnie’s ambition to put her children on stage, in 1909, she managed to group the young Marx’ into a vaudeville singing group billed as "The Four Nightingales" comprising Julius, Milton (as Gummo Marx) and Arthur (known as Arthur and later Harpo Marx). They were joined by a boy singer Lou Levy. They toured the U.S. as vaudevilles but with little success.