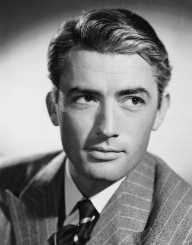 Gregory Peck was an American actor who is best known for his roles in To Kill a Mockingbird, How the West was Won and Cape Fear.

Gregory Peck was born in San Diego, California on 5 April 1916 as Eldred Peck. Peck’s mother, Bernice née Ayres was from Missouri and converted to Catholicism to marry Peck’s father. Peck’s father, Gregory Peck, was a chemist from New York and of Irish descent. Peck’s parents divorced when he was just five years of age, and his father’s mother raised him. Through his father’s mother, Peck was related to the Irish rebel Thomas Ashe. Ashe would take part in the Easter Rising, the Irish Declaration of Independence, a matter of weeks after Peck’s birth and was imprisoned. He died due to complications from force-feeding a year later.

Gregory Peck was raised as a Roman Catholic. He attended St John’s Military Academy, a Catholic military school. When his grandmother died, Peck returned to his father’s home in San Diego. There he attended San Diego High School. He spent one year in San Diego State University before moving to University of California, Berkley. He had studied theatre in San Diego and majored in English at Berkley. He was involved in sports at both Universities, participating in athletics and rowing. Peck was also performing in dramas at Berkley and appeared in five plays in his final year at the university.

Before taking up acting professionally, Gregory Peck dropped his first name, Eldred, for his middle name, Gregory. Peck went to New York to study his craft but struggled financially. Peck was often forced to sleep rough and took parts in productions in exchange for food. His first professional role was in a San Francisco production of George Bernard Shaw’s The Doctor’s Dilemma in 1941, just one week before the bombing of Pearl Harbour. The following year Peck made his first appearance in a Broadway production when he appeared in The Morning Star.

Peck was given an exemption from military service due to a back injury he had suffered at the university. Being one of the few performers not called up to the military meant Peck was in high demand during the Second World War. In 1944, Peck made his screen debut in the film, Days of Glory. The same year he starred in The Keys to the Kingdom, which also featured Vincent Price. Peck was nominated for an Academy Award for his performance in The Keys to the Kingdom. The following year he appeared in Alfred Hitchcock’s film, Spellbound.

Gregory Peck was again nominated for an Academy Award in 1946 for his role in The Yearling. Peck plays a former Confederate soldier who works as a farmer. The same year he appeared in the western, Duel in the Sun, which grossed twenty million dollars. In 1947, Peck played a journalist investigating antisemitism in, Gentleman’s Agreement. Peck continued to be prolific in his output; he appeared in four films in 1950. He appeared in the 1952 film adaption of Ernest Hemmingway’s, The Snows of Kilimanjaro. The next year saw Peck star in the romantic comedy classic, Roman Holiday.

He played Captain Ahab in the 1956 film version of Moby Dick. The film was well received critically although not overly successful commercially. He starred in and was a producer of the Western Epic, The Big Country. In 1961, Peck appeared in the successful war drama the Guns of Navarone.

1962 perhaps marks the pinnacle of Peck’s career, appearing in three hit films. The first was in Cape Fear; Peck plays a lawyer who is harassed by a former client, a convicted rapist. Peck’s second hit of 1962 was in the blockbuster Western, How the West Was Won. The film grossed over fifty million dollars. Peck’s third role of the year is arguably his masterpiece performance. He played lawyer Atticus Finch in the film adaption of To Kill a Mockingbird. Gregory Peck plays a white lawyer tasked with defending a black man accused of raping a white woman. The film and Peck received substantial critical acclaim.

Gregory Peck said in an interview that he was often approached by fans of the film decades after saying his performance changed their lives. Peck appeared in Behold a Pale Horse, in 1964. The film focussed on events after the Spanish Civil War and also featured Omar Sharif. In 1967, Peck was president of the Academy of Motion Pictures and Sciences. Peck starred in the highly successful horror film, The Omen, in 1976. The following year Peck again gained substantial critical praise for his portrayal of American World War II hero Douglas McArthur in, MacArthur.

1978 also brought success as Gregory Peck played Nazi doctor, Josef Mengele, in the science fiction thriller, The Boys of Brazil. In 1982, Peck played Abraham Lincoln in the television miniseries, The Blue, and the Gray. Peck also starred in the television series, The Scarlet and the Black, as an Irish Catholic priest who smuggled Jews and Allied POWS out of Nazi-occupied Italy. In 1991, Peck appeared in the Martin Scorsese remake of Cape Fear.

Peck retired from filmmaking in 1991 after, Other People’s Money. His last acting role came in 1998 as he appeared in a TV miniseries adaption of Moby Dick. Peck’s original character, Captain Ahab, was played by Patrick Stewart.

Gregory Peck married Greta Kukkonen in 1942. The couple had three children together, Jonathan, Stephen, and Carey. The couple divorced in 1955. Peck had an affair with co-star Ingrid Bergman while still married to Kukkonen. In 1956, Peck married French journalist, Veronique Passani. They had two children together, Anthony and Cecilia. Peck died peacefully in his sleep on 12 June 2003.

Gregory Peck was nominated for five Best Actor Awards at the Academy Awards, The Keys of the Kingdom (1946), The Yearling (1947), Gentleman’s Agreement (1948), Twelve O’Clock High (1950) and To Kill a Mockingbird (1963). His win in 1963 was his only Academy Award win from five nominations. Peck was also nominated for nine Golden Globe Awards. He won the Best Actor Award for his roles on The Yearling and in To Kill a Mockingbird. He also won a Best Supporting Actor in a TV miniseries Award for his role in Moby Dick. Peck was awarded the Presidential Medal of Freedom in 1969 by Lyndon B Johnson.

Gregory Peck was an outspoken individual throughout his career; He was a lifelong Democrat. He was a vocal critic of the House of Un-American Activities and the Vietnam War. Peck was on Richard Nixon’s enemies list due to his outspoken and liberal nature.