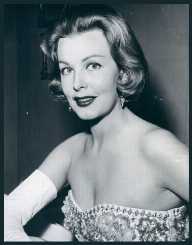 Actress Gladys George was born on the 13 September 1904 in Patten, Maine into a family of English Shakespearean actors. Her parents were Sir Arthur Evans and Lady Clare Evans.

Her English parents were touring actors, and at the age of three, George was part of their act known as The Three Clare’s, their family stage name. She made her Broadway debut in 1918 in The Betrothal. She then worked with Pauline Frederick’s touring company, and in 1919, George moved to Hollywood. Her first lead role was in the silent film Red Hot Dollars (1919). Her particular good looks were sought after in the silent movie era, but after an accident which left her face scarred, she returned to the stage for a while.