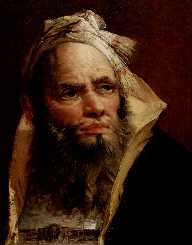 Italian painter Giovanni Battista Tiepolo was born on the 5 March 1696 in Venice. He was one of five children who was raised in a comfortable home. His father died in 1697 when he was still an infant.

From the age of fourteen, Giovanni Battista Tiepolo was tutored by the Venetian painter Gregorio Lazzarini (b.1655-d.1730). By nineteen Tiepolo had completed his first commission.

His first public as was The Sacrifice of Isaac in 1716. Then in 1717, his name appeared on the Venetian Painters Guild’s list as an independent painter.

Tiepolo’s style was formed by other Venetians including Giovanni Battista Piazzetta and Sebastiano Ricci. His work reflected a combination of grand fresco painting and the Rococo style.

His first masterpiece was a series of canvases which decorated a reception room in the Ca’ Dolfin in Venice between 1726 and 1729.

Early works included frescos in churches in Venice and Milan as well as the Archbishop’s Palace at Udine. First examples are the Anthony and Cleopatra series of thirteen pieces at the Palazzo Labia.

Tiepolo trained his sons Giovanni Domenico Tiepolo (b.1727-d.1804) and Lorenzo Baldissera Tiepolo (b.1736-d.1776). Tiepolo undertook a commission from Prince Bishop Karl Philipp von Greiffenklau in Wurzburg, Germany with both his sons assisting. This project turned out to be one of the most acclaimed ceiling frescos of the century. Another of his masterpieces was a commission from Charles III of Spain for the Royal Palace in Madrid known as The Apotheosis of the Spanish Monarchy. As a result of this work which he commenced in 1761, Tiepolo won other commissions from the Royal family in Spain and spent the rest of his life in Spain.

Tiepolo is recognized as the most significant painter working in Europe during the eighteenth century. He is considered the first master of the Grand Manner. Tiepolo was also known as a master draftsman.